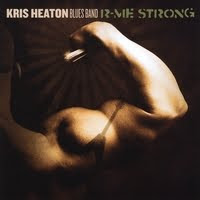 Connecticut's Kris Heaton has been in and out of the music scene for a number of years, taking a break to raise his family but coming home to the stage in 2002. Since then he's been a wild ride in Southern New England, playing to packed houses and opening for acts such as Stevie Ray Vaughan, Greg Allman, Huey Lewis and the News and Leon Russell. Heaton recently released his third album with the Kris Heaton Blue Band, R-Me Strong. Full of aggressive play, humor and pointed commentary, R-Me Strong is a fun listen full of Rock N Roll attitude.

R-Me Strong opens with Sugar, a testosterone-laden ode to a woman set to a Rhythm-n-Blues arrangement that is guaranteed to get your feet moving. Heaton has a voice that's perfect for the style of Blues/Rock he purveys, and the guitar work is hot. I'm Your Man is entertaining and fairly typical of the genre (the verses sound nearly identical to George Thorogood's Bad To The Bone). R-Me Strong is a tribute to all of those who serve in the US Armed Forces. R-Me Strong uses the call-and-response cadence common in old Blues tunes and military outfits in an arrangement that smacks of AC/DC. Shut Up is the most humorous song on the album, taking off after gossips with brutal alacrity.

And She Said is a joyous bit of innuendo where the guitar and harmonica get most of the good parts and generally rip up the dance floor. This tune is highly catchy; full of innuendo and intention. On Weatherman, Heaton takes on that guy who's so full of his ability to attract women he begins to think of himself as god-like. Heaton cuts him down to size to guitar work vaguely reminiscent of ZZ Top. Kris Heaton Blues Band almost seems to get a bit complacent thereafter, as the energy level generally falls for a while. Loser tries to recover the ship with a high energy level tightly twined into a mellow, melancholy performance. Heaton treats listeners to a wonderful live version of Long Time Ago. The sound quality of the recording itself is fine, although the song isn't mastered at anywhere near the same level as the rest of the album. Heaton closes out with When Men Cry, a song that underscores what's in your heart over what you do, what you make, etc. It's a pleasant ballad; a definite change of pace for Heaton.

R-Me Strong is a great way to get to know the Kris Heaton Blues Band if you don't know them already. Not every song works as well as the rest, but Heaton has high expectation and his band delivers. R-Me Strong deserves some attention.

coming home to the stage in 2002. Since then he's been a wild ride in Southern New England, playing to packed houses and opening for acts such as Stevie Ray Vaughan

That would be a clever trick!

Definitely from the George Thorogood school of rock.