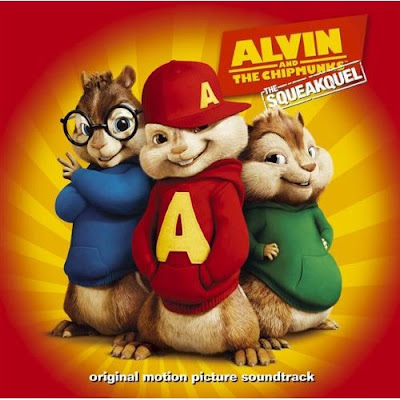 In reviewing the 2007 Chipmunk Movie soundtrack, Undeniable, we noted that Ross Bagdasarian, Sr. would be mortified to hear his Chipmunks voiced as they were. That really hasn't changed for The Squeakquel. The voices still sound over-processed, losing all of the low-tech charm of the original Chipmunk recordings. Whether it’s the basic recording technique or the use of software to modify the voices, the sound just doesn't work for anyone familiar with the original. That being said, anyone young enough to have missed the 1980's cartoons will likely be charmed by this soundtrack (and likely the movie), particularly if they liked 2007’s Undeniable. Alvin And The Chipmunks: The Squeakquel features singing voices of Ross Bagdasarian Jr. (Alvin); Steve Vining (Simon) and Janice Karman (Theodore). Additionally, we are introduced to the Chipettes: Brittany, Jeanette and Eleanor (all voiced by Janice Karman).

The Chipmunks open with a cover of The Kink's You Really Got Me, although it's really a cover of the Van Halen version). Its predictable stuff for The Chipmunks; decent but not a standout track. The Chipettes are next with Hot N Cold (Katy Perry). The vocal effects here are even more cloying than on the Chipmunk recordings. Pink's So What works a bit better for the Chipettes, although the vocalizations still sound highly electronic. Dead Or Alive's You Spin Me Round (Like A Record) gets the Chipmunks treatment, keeping the same feel as the original. This actually works as well as anything on the soundtrack and might even chart as is. The Chipettes tackle Beyonce's Single Ladies (Put A Ring On It) in perhaps the biggest misstep on the album. Between the vocalization issues (or EFX issues, if you prefer) and a striving for sound over melody, the franchise seriously begins to lose the heart that made it work for all of these years.

The Chipmunks tackle an overly modernized version of Stayin' Alive that relies more on bass than rhythm to drive the track, leading into The Chipettes brightest moment. The Song features Queensberry and is probably the best offering on the disc. The Chipmunk's It's Ok, on the other hand, is nearly impossible to decipher. The speed, effects and lack of any sense of diction on the song make it an aural mess (albeit with a catchy melody). The Chipmunks move into even shakier territory on Peaches & Herb's Shake Your Groove Thing.

The Chipettes pipe in next with Corinne Bailey Rae's Put Your Records On, an ill-advised choice by the music supervisor on the movie. Rae is one of those artists you just don't cover unless you either have a distinctive take on her song or you can really walk the walk. The novelty treatment here just pales in comparison to the original. Perhaps even more amusing is the Chipmunk's take on Foreigner's I Want To Know What Love Is. The song is redone in full electronic arrangement that's more about beat than melody, which is the essential core strength of the song. The vocal harmony effect here is nice, but is brought down by the electronic buzz in the vocals. Sister Sledge's We Are Family gets updated as an electro-rock hybrid at super-speed. Once again, sound is given importance over such elements as melody, harmony and pacing. The result is a wreck in the happening. The wheels never come off the car because the computer keeps it together, but there's little gratifying in the end result. The Chipettes' No One and The Chipmunks' I Gotta Feeling close out a disappointing set.

The Chipmunks, in essence, have crossed over the line from character to commodity. Cheap/easy computer animation and electronic effects tied to a desire to appeal to the lowest common entertainment denominator have stripped Ross Bagdasarian, Sr.'s creations of their inherent humanity. They are now officially a product rather than their long-standing status as cultural icons. If you're interested in The Chipmunks, I would suggest you take the time to listen to some of the older recordings made by Ross Bagdasarian Sr. There was more craft, humor and humanity in one of those original recordings than you'll find in either movie soundtrack. Good natured humor and an essential love for the characters has been replaced by a cynical, hollow humor driven more about return on investment than a desire to entertain.