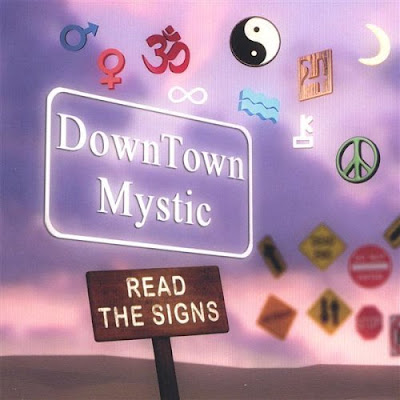 What turned out as amusing side project for Sha-La Records president Robert Allen has turned into a serious venture. DownTown Mystic produced a demo that wound up with two different songs getting airplay on KROQ. Ensuing national airplay convinced Allen it was time turn the demo into a full-length album. The result, Rock N Roll 4 The Soul, was a strong debut featuring co-songwriting by Bruce Engler and the rhythm section of Bruce Springsteen's E Street Band. Downtown Mystic returns now with their latest album, Read The Signs. featuring a new rhythm section and some serious songwriting.

Read The Signs opens with 1960's Folk/Rock of I Can't Let Go, a catchy quasi-love song that shows shades of Crosby, Stills & Nash in the harmonies. Go Back features some nice, lively guitar work but runs a bit long at five-and-half-minutes. DownTown Mystic is a decent listen; a bit on the bland side but sonically pretty. From the lyric perspective the song is a bit awkward, a trait that carries over a bit into One Step Closer. This is a song that has potential hit written over the music. The highlight of the album is Read The Signs, which sounds a bit like a Bob Seger tune. Read The Signs has a strong clear hook and is very catchy.

A close second is Think A Little Louder, which features one of those choruses that gets stuck in your head and won't leave of its own volition. DownTown Mystic brings the same feel good, infectious Rock sound to Test Of Time, a jubilant love song about marriage and the power of love. Tomorrow's Clown finds DownTown Mystic entering the California Country territory trod by The Eagles with much success, before breaking into infectious Roots Rock on A Way To Know. The last track on the disc, an untitled song that comes up as "Unknown" if your system displays title information moves back to the Poppy-Classic Rock sound that seems to the be the middle ground for DownTown Mystic. It's perhaps the most generic of the tracks on the album; pleasant but not overly impressive.

Read The Signs has its ups and downs, but when they're at their best, DownTown Mystic is an eminently listenable band. This is feel good music for folks who miss 1980's Guitar Rock and Adult Contemporary formats (ala radio's The River). Robert Allen has an exceedingly pleasant voice, and in general the songs are quite strong in the writing department. Take some time to Read The Signs.

You can learn more about DownTown Mystic at www.myspace.com/downtownmystic or http://www.shala.com/. Read The Signs is available as either a CD or Download from CDBaby.com.
Posted by Wildy at 5:10 AM