Review: Race You There - Acts Of Treason 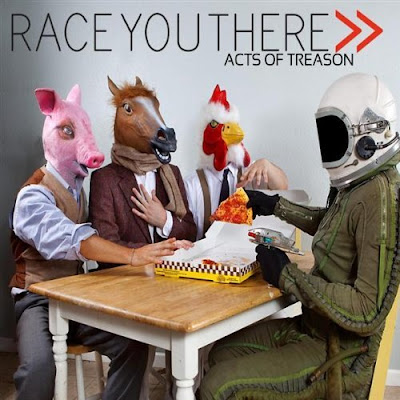 Tucson, Arizona is the home of Race You There, a band born on Craigslist and built on honest poetry and the failure of the band to cement themselves to one way of musical thinking. Race You There leaves all options on the table with regard to instrumentation, musical choices and sounds. These traits are eminently identifiable on Race You There’s second album, Acts Of Treason.

Acts Of Treason opens with Eastern Shore, a contemplative, melodic Pop tune that's gently infectious. Jacob Acosta impresses with his range and presence on lead vocals, and the musicianship is solid. Why Are You Distracting? is a tough listener. Race You There doesn't seem to know where they're going with this tune; falling prey to droning bi-tonal runs. Starcrossed isn't all that different, although at least the resolutions seem to step out of the rat race with the imprimatur of creativity. Race You There heads for dark waters on Walking Dead; a mournful melody supported by a minimalist arrangement. Walking Dead is intriguing, but ultimately overstays its welcome at nearly six-and-a-half minutes (it should be noted, however, that Clarissa DuBose is stunning on backing/co-vocals).

Race You There stays with the gentle Rock sound with Scrapbook before breaking out something a bit more dangerous in Street Preacher. Street Preacher stretches as artistic and geographic boundaries in a highly enjoyable tune. Race You There says goodnight with Finger Like A Knife, a disjointed yet intriguing number. Dubose returns on vocals with another stunning performance. As an added bonus, Race You There follows up with an acoustic mix of Eastern Shore that's even better than the studio version.

Race You There strikes me as a band in search of their sound. Acosta's voice stands out, but isn't always best fitted to some of the material here. At their most ethereal, Race You There has a sort of graceful beauty to their sound, but some of their musical sidebars seems awkward by comparison. Acts Of Treason in an intriguing album, for what it sometimes is as well as for what it sometimes fails to be. Race You There bears watching (and listening) to see where they go next.

You can learn more about Race You There at www.myspace.com/raceyoutheremusic or www.facebook.com/raceyouthere. Acts Of Treason was released on iTunes in December of 2009. Hard copy will be released on January 29, 2010. Keep checking the band’s web pages for availability.
Posted by Wildy at 5:00 AM