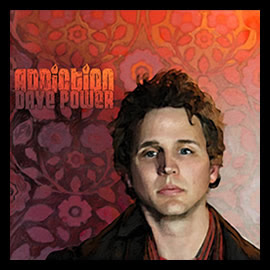 Brisbane, Australia's Dave Power found his mother's old acoustic guitar at the age of 16 and found a creative world opening for him like none he'd ever imagined. His need to play helped Power develop a latent talent as a lyricist and songwriter that dovetails nicely with his strong, clear singing voice. Power has begun to grab a lot of attention in Australia, winning or placing as a finalist in songwriter/performing competitions sponsored by 4BC and Chartsong Studios. Internet and terrestrial airplay has been strong for the artist whose primary influences include Bob Dylan, John Mayer, Dave Matthews, James Taylor and Chris Isaak. Power's latest EP, Addiction, offers up six original tunes that have the potential to make Power a breakout artist both in Australia and in other markets around the world.

Power plies a highly personal story-telling style in song on Addiction, opening with the sweet reverence of Angel Girl. Angel Girl is pure mix tape magic that could be a true hit for Power. American Adult Contemporary Radio would eat this up, particularly if a show like Delilah got hold of it. Power launches next into the soulful Lovestruck, crafting a smooth and sultry jam that has major commercial potential. Addiction tells the story of being so enthralled with a relationship that all other responsibilities fall out of focus. The dark elements of the arrangement foretell the realization that all is not right in a wonderfully written and arranged tune. Power gets in an upbeat love song certain to fill up dedication lines on Here Tonight. What's most impressive about Power is the clear, prescient Pop sensibility he displays in his songs. Power writes melodies you want to sing along to and lyrics that are memorable, all wrapped up in ribbons of subtlety and grace. The Old Man reflects on the wisdom of elders in a wonderfully crafted story-song that will serve as a pep talk for anyone chasing a dream when doubts creep in. Power closes out with The Grand Plan, a meandering love song with an ethereal feel.

Dave Power is the real deal as a songwriter, reminding me strongly of Dan Fogelberg for his lyrical acuity and sense of melody. Addiction is worthy of its name; I suspect that folks who get Power will have these songs on repeat for some time to come. This is not the last we'll hear of Dave Power. Someone this talented won't be just a regional talent for long.

You can learn more about Dave Power at http://www.davepowermusic.com/ or www.myspace.com/davepowermusic. If you need your Addiction on CD you can purchase it directly from Dave Power, or you can get digital from iTunes.
Posted by Wildy at 5:05 AM