Review: Silver Spade - From The Ashes 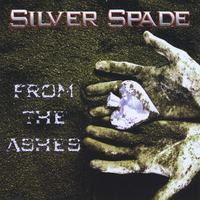 New York City's Silver Spade remembers a time when screaming was considered a vocal affect rather than a lead vocal. They also remember a time when Rock And Roll was fun to listen to. These are qualities that Silver Spade tries to bring out in their self-produced, debut album, From The Ashes. Brothers Rick and Bob Yapchanyk formed the core of the band back in 2002, adding drummer Mikey Keeler and bassist Ed Brandt to help fill out the sound. Big Rock And Roll with real vocals and a songwriter's sensibility are the orders of the day.

From The Ashes opens on a bright note with the relentless Machine. Silver Spade displays an ability to rock hard while maintaining a hint of Pop sensibility. The feel and guitar work of Machine reminded me a bit of Iron Maiden, and vocalist Rick Yapchanyk certainly has elements of Bruce Dickinson without being quite so on the edge. Red Magic keeps the pedal to the metal sonically, but I thought the lyrics and vocal line were a bit awkward here. From The Ashes hits the theme about living to fight another day and overcoming adversity. The song rings with cliché but is a decent listen. Bittersweet Cry is a fair attempt at a power ballad, but Silver Spade just doesn't quite pull this one off. Musically it's decent, but Yapchanyk just doesn't have a voice that works well singing soft. He's most at home with a yell/sing style that works well for him, and the higher pitch portions of this song work some, but down in the chest voice things don't work so well.

Misplaced finds Silver Spade in top gear with a mildly melodic hard rock tune driven by pulsing guitar rhythms. I Try returns to the ballad form with no more success than the earlier attempt. Forgotten and Ghost Town are both well intended. Forgotten is a bit bland , whereas Ghost Town is highly inventive on the music side (but lyrically awkward).

From The Ashes displays a band that can really raises a ruckus when they want to, but the music presented by Silver Spade doesn't quite reach the band's potential. I suspect it will be there on stage, but the production team didn't do the greatest job of capturing Silver Spade's live sound. on From The Ashes. The material itself is hit or miss, but I suspect Silver Spade will be around for some time to come.

You can learn more about Silver Spade at http://www.silverspademusic.com/ or www.myspace.com/silverspade. You can purchase From The Ashes as either a CD or Download from CDBaby.com.
Posted by Wildy at 5:00 AM