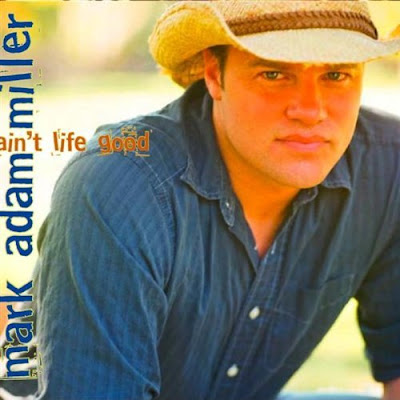 Mark Adam Miller brings his down-home Louisiana Swamp Rock influence to Nashville Country on his debut album, Ain't Life Good. A highly creative singer/songwriter with personality plus, Miller has the same sort of charisma that made Garth Brooks an international superstar, and writes music that will sit as well with fans of modern country as it will with Country fans of an earlier age.

Ain't Life Good opens with the rocker You Don't Know Jack, a highly radio-friendly tune that borders on Outlaw Country. You Don't Know Jack is very well written, but shines as much from Miller's personality, which takes up residence in the song and resonates. I Like That You Do is a gritty love song with real commercial punch. The chorus is the sort you find yourself humming/singing days after hearing the song. I'd Do It Again heads for the Mix Tape pile; a mature love song for the married couples out there. Miller breaks into sludgy Blues-Rock on Favorite Ex-Wife, a darkly vibrant ode to past loves (or one, at least). There's an element of humor in this song, and the arrangement is contagious.

Ain't Life Good is mildly catchy; the sort of tune that does well on Country Radio without making a huge impression. Miller's personality still shines through the song, but he has pulled back a bit from the first few songs on the album. Karen Bailey and her Dolly Parton vibrato sit in on Fragile, a sensitive ballad about being different. The song itself is decent, and Bailey's voice is eminently listenable, but Miller and Bailey go together like peanut butter and chocolate. He Don't Belong Here is a bit vague, but plays like the heartbreaking story of someone who has lost the life he's known. The protagonist is locked inside himself; seeing his loved ones come and go without understanding what's happened and without being able to respond or interact. It's somewhat unusual fare for any form of popular music, much less country, but the song works in much the same vein as James Taylor's Frozen Man.

Livin' Our Life Away is a bit more straightforward, playing to a bland Pop/Commercial Country sound sure to gain some attention from radio programmers but probably enough to get it widespread airplay. Bring It On Down is very catchy, walking the line between Country and CSNY-style Folk/Rock. Ain't Life Good closes out with an alternative mix of Fragile, this time with Karen Bailey as the sole vocalist.

Mark Adam Miller is the sort of songwriter who will eat well the rest of his life even if he never performs one of his own songs again. The fact that Miller is a strong performer on his own is gravy. Miller's voice isn't the best pure voice in the Country world, but his sound is wonderfully textured, warm and full of life, effectively glossing over any perceived deficits. Ain't Life Good has its rough moments, but on the whole is a strong debut effort from an artist with the world at his feet.

You can learn more about Mark Adam Miller at http://www.markadammiller.net/ or www.myspace.com/markadammusic. You can purchase Ain’t Life Good as either a CD or Download from Amazon.com.
Posted by Wildy at 5:33 AM