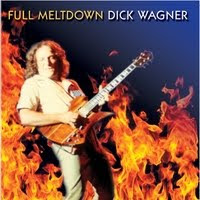 Dick Wagner is a quiet legend. You've heard him play guitar many times, and you've heard many of his songs over the years even if you have no idea who he is. Wagner was Alice Cooper's musical director and guitarist in Cooper's heyday, co-writing some of Cooper's biggest hits. He's played lead guitar on or written songs for folks such as Aerosmith, KISS, Peter Gabriel, Ringo Starr, Lou Reed, Meat Loaf, Hall & Oates, Tina Turner, Etta James, Air Supply and Burton Cummings; appearing on 150 albums (14 platinum, 16 gold, 5 silver). Wagner is also the recipient of several BMI songwriting awards over the years. Wagner writes for himself on his latest album, Full Meltdown, showing a much softer touch than you might have expected.

Full Meltdown opens with Still Hungry, a surprisingly reserved opener considering the subject matter of the song. The title suggests a drive that just isn't represented in the easy-listening rock arrangement. The song is decent enough, just something of a dichotomy. Blue Collar Babies is a youthful fantasy about fast cars, parties and all that comes with being wild and young. It's a tuneful song, catchy in demure fashion, but has a bit of midlife crisis feel to it. Insatiable Girl feels more like classic Rock N Roll, like something you might hear on AOR radio. Wagner captures a sweet sound on Another Twist Of The Knife, hitting stride like a 1980's glam rock act. You could almost picture Whitesnake or someone of similar ilk ripping into this tune. Wagner breaks into a cover of Stagger Lee, a classic rock take that's most similar to Lloyd Price's 1959 rendition. Wagner's guitar work here is particularly sharp, and the rendition in general sounds a bit like Elton John.

Wagner gets back to that Elton feel on These Days, a piano and voice ballad that carries the prettiest melody on the album. Wagner digresses into dreamy, melancholy rock on I Might As Well Be On Mars before revving things up a little for Steal The Thunder. The energy here is still a bit low-key but works in the guitar-revved sound. The dreamy sound returns for Darkest Hour before getting shoved gently aside by Motor City Showdown and its Elton John style theme. Wagner closes out with the dark ballad Feel It All Over, taking it up to mid-tempo in the chorus and dropping in some great guitar filler along the way.

Full Meltdown is a pleasant listen but never reaches critical mass. Dick Wagner is very capable with a guitar in his hands, and possesses a voice that deserves to be heard, but Full Meltdown feels like a project that was never fully committed to. The intensity in the vocal line often doesn't match the lyrics or the musical drive of a given tune. This is late-stage Boomer rock; keen enough on the tricks of the trade to sound relevant, but once you get beneath the surface the water isn't terribly deep. A pleasant musical snack, but not enough for a meal.

You can learn more about Dick Wagner at http://www.wagnermusic.com/ or http://www.desertdreamsllc.com/. You can purchase Full Meltdown as either a CD or Download from CDBaby.com.
Posted by Wildy at 5:00 AM