Review: John Swanson - We Can't Party Like We Used To 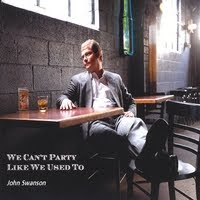 John Swanson - We Can't Party Like We Used To
2009, Acoustic SwaneeLand

Aurora, Colorado's John Swanson takes the sounds of Dixieland, Swing and Las Vegas and swirls them around into a hip New-Jack swing with Blues ancestry while referencing folks such as Al Capone and Charles Buchowski on his sophomore album, We Can't Party Like We Used To. Swanson's music is original jazz with an old school feel but a modern edge, channeling the hip, tough-guy feel of Sinatra and the abrupt musicality of a John Pizzarelli.

Swanson opens with I Guess There Are Worse Places To Be, hip bit of Swing done in minimalist arrangement. Swanson has a rough, anachronistic vocal side sound would seem to speak of the city streets and shady deals. New Route 66 seems a bit forced lyrically, but when Swanson speaks with his guitar anyone within reach out to be listening. Nice As A Day Can Be has a quiet, classic feel. Swanson does pretty well in general with the vocal line by keeping it simple, but when he tries flourishes or getting out of his strict talk/singing style vocal flaws become readily apparent. It borders on distracting in Nice As A Day Can Be, but the song itself is enjoyable enough to overlook it.

The Cougar That Got Away is a slinky dose of Jazz that plays on the currently Pop-centricity of the cougar concept. The song comes across as a bit gimmicky, but then Swanson returns to the chorus, voiced by two mischievous saxophones and all is forgotten. We Can't Party Like We Used To might be re-titled The Generation X Blues; it laments responsibility's way of sneaking up on you when you aren't looking. It's a well-written song featuring some serious guitar work and tasty horn arrangements and is one of the better compositions on the album. That's My Story (And I'm Sticking To It) yields an almost atonal melody line as sung by Swanson; the entire song seems a bit out of phase, with tenuous relationships between instruments with regard to melody and harmony. Swanson closes with We're Even Now, returning to the Swing that he started out with.

We Can't Party Like We Used To may almost be prophetic. It's a decent album, but there's an awkwardness herein that suggests a discomfort with the Jazz style that drives much of the album. John Swanson is a capable writer, and as a guitarist and saxophonist he is accomplished, but as a singer he can be a difficult listen if he doesn't stay within his fairly narrow range. We Can't Party Like We Used To has some good qualities, and I wanted badly to like it more than I did, but in the end it was too uneven to truly connect with. There's some good material here, but you'll have to weed your way through the chaff to get there.

You can learn more about John Swanson at http://www.johnswansonmusic.com/. You can purchase We Can’t Party Like We Used To as either a CD or Download from CDBaby.com.
Posted by Wildy at 4:55 AM