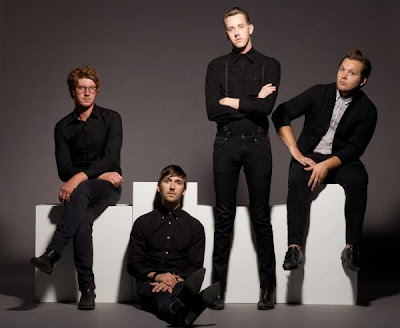 Fort Worth, Texas quartet The Burning Hotels bring a delightful mix of melodic Post-Punk New Wave rock on their first full-length album, Novels, due in April of 2010. Shades of U2 can be heard at times rising out of the rich musical tapestry constructed by The Burning Hotels with the help of mixer Mark Needham (The Killers, Bloc Party).

Novels opens with the dense, compact Rock N Roll of Austin's Birthday. Tight musicianship and strong production values produce a British New Wave feel. It's an intriguing open to an album that both excites and disappoints in equal measure. Boy Or A Girl keeps the same vibe with a quirky sensibility added in, but by the time The River arrived I'd already begun to suspect that the sound and dynamic of Novels was a bit too static. On Time, The Burning Hotels pulled out of the rut, firing up a sound reminiscent of U2. The energy level rises noticeably on this song as does the tune's virulence, although lyrically The Burning Hotels don't seem ready to play on the same fields as U2.

Silhouette is pure melancholic Pop Noir; a highly enjoyable venture that doesn't so much reflect a change in approach for the band but better framing of their strengths. The Burning Hotels find a niche here where their low-key approach works well. Tempo and construction vary widely on Silhouette, and the band appears willing to take a few more risks. To Whom It May Concern lives on the strength of a strong chorus. The dynamic is still a bit too narrow here, but The Burning Hotels at least appear to be trying to stretch the boundaries a bit. Where's My Girl is pure New Wave Pop with a bit of commercial edge to it; the sort of tune that will play well live. The Burning Hotels close with their most vibrant track, One To Five. One To Five is very catchy; a great ending that will entice listeners back with a great last impression.

The Burning Hotels exploit a heavily layered wall-of-sound feel on what is essentially retro New Wave rock on Novels. The effect is wonderful when it works (and when The Burning Hotels decide to take chances), but can also be stifling when the band allows themselves to get stuck in a rut. This is more an issue for production than for the band themselves, as it is often difficult to hear these sorts of critical points from inside the creation process. It's the producer's responsibility to shape the overall recording to avoid both the appearance and reality of complacency of a band. The Burning Hotels manage to shake things up periodically on Novels, but not before becoming a bit too settled in established rolls. Novels shows some real potential; if The Burning Hotels keep pushing they're going to break through some walls and create some really vibrant music.

You can learn more about The Burning Hotels at www.myspace.com/theburninghotels. Novels drops sometime in April, 2010, but you can check out the first single, Austin’s Birthday, available as either a CD or Download from CDBaby.com.
Posted by Wildy at 7:47 AM

Labels: Bloc Party, The Killers, The U2