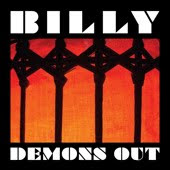 Mullumbimby, New South Wales, Australia is the home to Billy, a rock quartet with an unusual sound. Lifelong brothers Derek (vox, guitar, keys, drums) and Tim Kelly (guitars) joined forces with Megan Hunter (vox, keys, drums) and Ian Brett (bass) to release their debut album, Demons Out, in the Spring of 2009. With influences from all over the musical spectrum as well as existential philosophy, Billy cuts their own path through the musical wilderness down under.

Demons Out opens with Fiction, a delicious bite of catchy, dark-hued Rock N Roll. There's an intriguing 1960's-gone-aughts feel here built around Rock attitude and layered vocal harmonies. Fiction, alas, is the highlight of the album. Simple Mistake is a decent upbeat tune, but Billy ends up in a maudlin morass for much of the rest of Demons Out. Billy tries to shake their demons on Animal Calling with a mildly catchy arrangement that trips on its own awkward lyrics. Billy shows one final sign of life on Want For Nothing before fading away with In Spirit.

What to make of a band with an intriguing vocal mix and one really good song on their debut album. Is it the classic "lightning in a bottle" moment that most bands have? Or is there more in the creative well from whence Fiction came? That's the answer we'll be looking for on Billy's next album. For now, there's at least the idea of potential here. Fiction is just good enough to make you want to wait and see.

You can learn more about Billy at http://www.billyghosts.com/. Demons Out is available electronically via iTunes.
Posted by Wildy at 6:03 AM

.., i love this!!! really artistic and i have been checking them out for months...
learn piano online

These guys rock! Fiction is a great song off an amazing album.