Review: Antoinette Montague - Behind The Smile 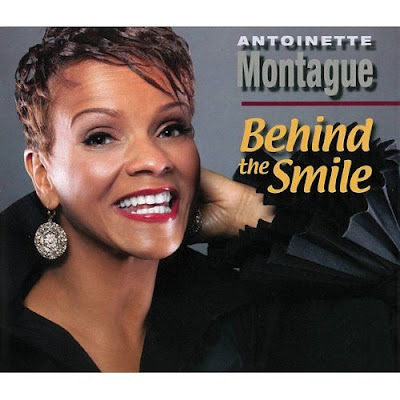 Antoinette Montague - Behind The Smile
2010, In The Groove Records

Montague opens with the title track, a self-penned song that sounds like it walked right out of The Great American Songbook. Montague's warm alto has just a glint of steel and can go from dark and serious to light and campy as quick as the wind changes. I Hadn't Anyone Till You sounds like it might have come out of the 1960's Vegas era. You could almost picture Montague on stage alongside Keely Smith from this performance. Slinky jazz is the order of the day on here, Easley practically steals the show on Clarinet. Ever Since The One I Love's Been Gone hits a strong dinner/cabaret feel, with Miller dominating on piano.

Montague's take on Marvin Gaye's What's Going On inject jazz and a slightly different type of soul into the classic Give Your Mama One Smile. While Montague is outstanding c tune. Montague is excellent, but the song doesn't transition well in spite of the best efforts of the band. The Song Is You is vocally distinctive, but Miller tries to do a bit too much with the piano this time around. The lust for speed becomes something of a mess in the bridge/solo. I'd Rather Have A Memory Than A Dream is melancholy and lush, and Miller is exquisite this time around on the piano. Montague takes on a Smokey Robinson classic in Get Ready in an outstanding swing take that might just play better than the original. The highly pensive Summer Song offers up the loveliest moment on the album, but Behind The Smile ends awkwardly thereafter. Somewhere In The Night didn't really connect, and Duke Ellington's 23rd Psalm came across as soulless, failing to capture the inherent power of the verse of Ellington's original take.

On the whole, Behind The Smile is a very successful effort. It has its weak spots, but Antoinette Montague and her band make the most of their better moments and make it easy to overlook the occasional flaw. Montague's voice will keep you listening as long as she keeps singing, and it would be hard to find a more talented backing band anywhere. Behind The Smile is both serious and serious fun, and well worth digging into.

You can learn more about Antoinette Montague at http://www.antoinettemontague.com/ or www.myspace.com/antoinettemontague. You can purchase Behind The Smile from Allegro Music or Amazon.com.
Posted by Wildy at 5:10 AM