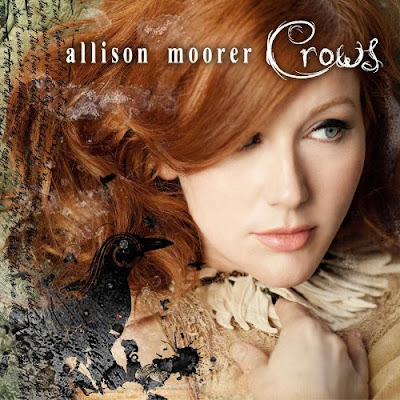 It would be ingenuous to categorize Allison Moorer as lesser known given her Academy and Grammy Award nominations, six albums, movie and stage appearances and collegial respect she receives in the music industry, but the kid-sister of Shelby Lynne carries herself quietly for one of her accomplishments. On February 9, 2010, Moorer will release her seventh album, Crows, on Rykodisc Records. That sense of quiet is joined by a humble confidence and sense of self-exploration on Crows, Moorer's most personal and weighty album to date.

Moorer opens with the haunting Abalone Sky; rife with melancholy and remembrance, this is an emotionally powerful song, even if the true force is always deep beneath the surface. Just Another Fool is an admonition; an indication that the object of the subject's affection is entirely out of reach. This could be a conversation from one good friend to another done in song. It's fairly well done, although perhaps a dichotomy exists between the urgency of the words and that in which it’s voiced. The Broken Girl is a decent Country/Rock tune, generic enough to have mild chart aspirations in both genres, but probably not the breakout single you'd hope for. Should I Be Concerned sounds as if may have started out as a classic Country heartbreaker, but somewhere along the way turned into a deliciously Progressive Cabaret Rocker. Moorer's voice is incredible through, velvety smooth and full of emotion, but it's never better than in the diva performance she gives on Should I Be Concerned.

Moorer explores a childhood memory on Easy In The Summertime with such simmering grace in her imagery it's as if you're standing there by her side. The arrangement is a bit repetitive with a hint of a dream-like quality, but the story-telling is priceless. On The Stars & I (Mama's Song), Moorer offers up a memoriam to her mom through the eyes of herself and her sister. The song is a brilliant tribute to mothers and the power of their love to bind and protect us even once they've passed beyond. Still This Side Of Gone is written from the depths of heartache, exploring the landscape to find a way to begin the process of hurting and trying to replace the "love sized hole" left by the loss. It's not a torch song, but Moorer shows some of the same emotive qualities and ability to craft a performance that marked the best of that era.

Sorrow (Don't Come Around) has a classic feel to it; an update on what would be a classic country sound. You could almost hear Loretta or Dolly trying on this song for size. It's Gonna Feel Good (When It Stops Hurtin') starts out as an innocuous number but transitions into a soulful tune that can only be described as fun melancholy. Moorer winds up Crows with the title track, which on first blush sounds like a paean to superstition and paranoia. But listen closer and you're likely to become as excited as I was. Crows is one of those rare moments when a songwriter transcends song and character and creates a living moment in song. In a Randy Newman-esque stroke, Moorer takes us away for a moment into a mind that is riven with fear over the commonest of occurrences, a crow in the yard. Moorer infuses life and humor into the song and just might catch you napping with an incredibly brilliant song.

Allison Moorer exudes that quiet confidence that turns good performers into great ones, and great performers into legends. I'm not willing to give her that last title yet, but if she writes a few more transcending songs like Crows and she'll take it up all on her own. Crows is an exclamation point in a career full of quiet highlights. Make sure you check it out.

You can learn more about Allison Moorer at http://www.allisonmoorer.com/ or www.myspace.com/allisonmoorer. Crows drops on February 9, 2010. You can pre-order copies from Amazon.com. Expect wide distribution via bricks and mortar, e-tail and digital download sites such as iTunes and Amazon MP3.
Posted by Wildy at 6:03 AM

This is all erroneous what you're writing.