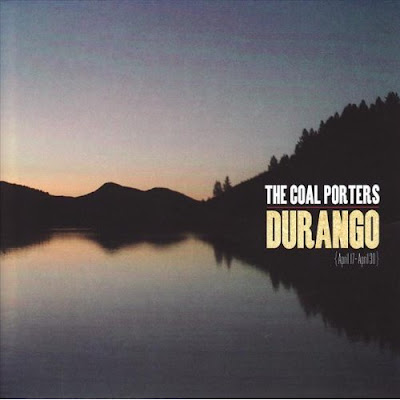 London's The Coal Porters have an ace up their sleeve in Kentuckian (and former Long Ryder) Sid Griffin, but their brand of alt-Bluegrass and Folk has made them fan favorites both east and West of the Atlantic Ocean. With the release of their fourth album, Durango (April 17 - April 30), The Coal Porters look to build on the critical and commercial success of 2007's Turn The Water On, Boy! The Coal Porters are coming up on their 20th anniversary as a band, and just seem to be getting better with time. Durango was born of pure inspiration following two killer shows near Durango, Colorado. The album was produced by Ed Strasium (Mick Jagger, Phil Spector, Belinda Carlisle, Jeff Healey).

Durango opens with Let's Say Goodbye (Like We Said Hello); a delicious bit of bluegrass picking around a sadly humorous tune about ending a relationship with the same smiles it started with. The lyrics here are particularly sharp: "I feel like a beer and she's craving vermouth" isn't about drink preference. Moonlight Midnight featuring Peter Rowan on guitar, and Carly Frye’s sultry alto on lead vocal. I'm Not Going Away is reminiscent of Blue Rodeo, with Sid Griffin sounding a bit like Jim Cuddy. The banjo work here is dizzying and the vocal harmonies top notch. The Squeaky Wheel Gets The Oil is a funny and funny tune that will make you want to dance.

Like A Hurricane is structured in gorgeous melancholy; a song about not being able to stand your ground in a relationship because the other won't stand still. Permanent Twilight may be the best writing on the song; the valedictory from a veteran who's paid the cost of war and would do so again if he were able. The song serves as a reminder that regardless of politics or belief, there are people in the world who sacrifice themselves every day for our ability to think and speak freely. The Coal Porters show off their immense instrumental skills on Roadkill Breakdown with Tim O'Brien sitting in on guitar. Two violins play off of the banjo here, delivering some killer riffs and delightful interplay. Carly Frye returns for the closing track, Sail Away, Ladies! It's a strong, entertaining tune and the instrumental work is simply over the top.

The Coal Porters offer up a solid brand of Newgrass Americana on Durango. Instrumentally the band has few peers, and both Griffin and Frey have their upside as vocalists. The songwriting on Durango is solid but generally not exciting. Humor and intelligence are woven through the songs on Durango, but the special spark that turns solid material into great material either isn't here or isn't utilized. Almost as if in the process of writing The Coal Porters make a lot of safe choices. It's a solid, enjoyable listen, but you can't but wonder if it couldn't be more.

You can learn more about The Coal Porters at www.myspace.com/thecoalporters. You can purchase Durango (April 17 - April 30) as either a CD or Download from Amazon.com.
Posted by Wildy at 7:06 AM