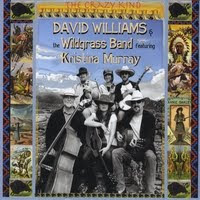 Wait a minute, I need to get the phone. Hello?
Yes... I just listened to it.
Yeah, she's amazing.
No, I don't know her phone number.
Sorry man, I don't have it. Try the band's MySpace.
Right. Bye.

Sorry, that was Nashville. They were wondering where Kristina Murray has been all of their life.
Don't let me short-sell you David Williams & The Wildgrass Band. Williams as a songwriter and instrumentalist is amazing, and the band is top notch. Williams is even a solid vocalist, but Kristina Murray cuts a vocal line that recalls folks like Kitty Wells and Patsy Cline. All of this becomes quickly clear on the band's latest offering, The Crazy Kind.

The Crazy Kind opens Annie Oakley; stepping right out the heyday of Country music with an ode to the original cowgirl. The writing and playing here are incredible, and Murray is a revelation. Crazy Kind feature a duet of Williams and Murray that could be about the life of a musician (or another other artist/performer). Going Home is done in a strong bluegrass arrangement, and while sounds and styles shift like sand throughout the album, you'll note quickly that the quality throughout doesn't change. Why Do Angels Get Wings? is a thrilling bit of hard-boiled Bluegrass. Murray sounds here like a hard woman who’s had a hard life, but reflects a rough-hewn beauty in the vocal line and the hope inherent in it.

Cheyenne has a real old-time feel and a melody that's absolutely gorgeous. The dueling violin sound gives Cheyenne a stark feel (particularly in the bridge), and the picking on both guitar and banjo are well worth listening in for. Ukrainian Girl feels a bit out of place here, but the story is well told and interesting enough that you'll forgive the indiscretion. Colorado finds Williams and Murray together again in a gorgeously melancholy song of remembrance before barreling into Half Bad. Half Bad is a tongue-in-cheek tune about the virtues of falling in love and the effects it can have on you. The band pays tributes to some of the greats of Country music in the process. Williams sets the metronome high on Paul's Song, ripping off rapid-fire lyrics about pinching pennies to get through hard times and adding in some of the most challenging pick work on the album.

Kitchen Table is a wonderful tune about the central dais of family life in another age. The kitchen table at one time was the place for visiting, family meetings, working out problems, negotiations, preparing for war and anything else you could image. It was the central meeting place. Kitchen Table pays tribute to this central role from the perspective of the memories that table holds in wonderfully subtle and nuanced terms and a pretty melody. Heavenly Road finds Williams on lead again, reminding me of a slightly older and more weather-worn Paul Gross vocally. Instrumentally there may be few better, and the low-key performance offered here is exquisite. Redheaded Singer has a muddy Bluegrass feel and celebrates the animal attraction a singer can inspire. Musically, it's a WOW moment right down to its dark, stark arrangement. David Williams & The Wildgrass Band close out with Floodwater, drawing on a tradition of finding light in darkness. The flood here is scene as a means of rising up to heaven. This song could have walked right out of an old Bluegrass songbook, and is deftly performed here.

David Williams & The Wildgrass Band featuring Kristina Murray is a musical force to be reckoned with. Folk, Country and Bluegrass outlets are likely to welcome them with open arms. Don't be surprised if they become something of a big thing either now or in the future. The group is good enough to headline in Nashville, but don't be surprised if a few slick record producers line up and try to pry Kristina Murray away. Her voice is one that would fit right in at the Grand Ol' Opry, and the band is good enough to play right alongside her there. The Crazy Kind works because the blend of all these elements (songwriting, musicianship, vocals) blend in all the right ways on the album. Even with a couple of slow moments, the quality never wavers. It's an album you'll come back to again and again.

You can learn more about David Williams & The Wildgrass Band featuring Kristina Murray at www.myspace.com/davidwilliamssongs. You can purchase The Crazy Kind as either a CD or Download from CDBaby.com.
Posted by Wildy at 5:10 AM