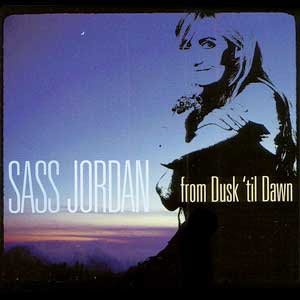 Sass Jordan never goes away. The owner of twelve Top-40 singles in Canada (including two in the Top-10, keeps finding ways to express herself in the arts. The star of the off-Broadway hit Love Janis also served as a judge for six years on Canadian Idol. Her music has been featured on numerous television shows and soundtracks (including an iconic duet with Joe Cocker on The Bodyguard soundtrack. Jordan's toured with Aerosmith, Cheap Trick, Alice Cooper, Van Halen, Carlos Santana and Cocker, but always returns to her own solo performing as the root of her creativity. On March 16, 2010, Jordan releases her eighth album, From Dusk Til Dawn. Rather than coasting comfortably at a point her career when the Juno-Award winning songwriter might, Jordan sparks with the vibrancy that turned heads even back in her days with Montreal’s The Pinups.

From Dusk 'Til Dawn opens with the delicious Blues/Rock of What I Need. Jordan steeps herself in the roots of old school Rhythm & Blues with the sort of strong rock vocal performance she's become known for. It's a knock out track that could be a big winner over the radios and at the award shows. Fell In Love Again goes with a classic Motown feel. You could almost here Mary Wells digging into this one, and Jordan does a great job with it. Awake is a gorgeous ballad full of regret; a song about getting ready to move on. For a rocker with something of a rough edge to her voice, Jordan is surprisingly polished and nuanced on the ballads on From Dusk 'Til Dawn. Jordan's everywoman act continues on Why Did You?, where she slips in Americana shoes amidst a big hook and catchy arrangement.

Lonely blends Country, Blues and Rock, ala Bonnie Raitt. This is another tune that could conceivably be a big hit over the airwaves. Jordan goes for an almost Appalchian feel on Matter Of Time, using very basic song structure and minimalist arrangement accented by great vocal harmonies. The song is well written and expertly performed. Jordan aces her cover of Tom Waits' Ol' 55, going for a highly fluid and smooth rendition, which works wonderfully well with and in contrast to Jordan's rock diva rasp. Stronger is great Pop songwriting; perhaps not as elemental as the other songs presented here, but certainly a decent offering. Jordan closes with the folky Home Again, a solid closer that sees Jordan adding to her versatility as a performer.

I remember the days of Racine and Rats, when Jordan was challenging Lee Aaron for the title of Miss Thing on the Canadian rock charts. Jordan hasn't lost the edge that made her a hit in Canada back then, but as an artist she's matured; adding nuance and class to a dynamic voice and an ear for melody that goes well with her ability to blow the roof off a room. From Dusk 'Til Dawn isn't so much a mellowing of Jordan's style or sound as it is a broadening of horizons. It would appear several years of judging the performances of others has made Jordan even more astute in making her own musical choices. On From Dusk 'Til Dawn she executes nearly flawlessly without giving up an iota of the energy or passion that always gave Jordan her Sass.

You can learn more about Sass Jordan at http://www.sassjordan.com/ or www.myspace.com/sassjordan. From Dusk Til Dawn sees its US release on March 16, 2010. Expect wide availability, if you simply can’t wait, the album was released in the Fall of 2009 in Canada, and is available through numerous resources on the web, including MapleMusic.com.
Posted by Wildy at 7:12 AM