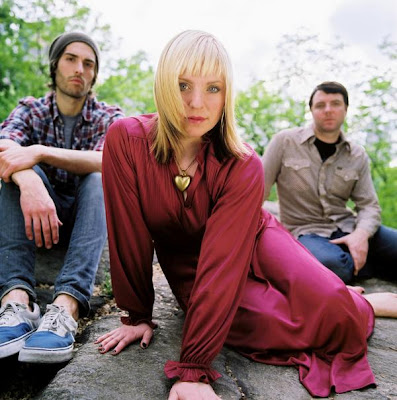 Knowledge Machine turned out to be a confounding experience as a reviewer. If you listen closely to Static Of The Gods, there is real talent here. Vocalist Jen Johnson doesn't have a perfect voice, but when she stays within the workable portion of her range she has a good, strong, clear sound that works for her. Guitarist Ben Voskeritichian is very talented and ready to bust out and show off at most anytime; unfortunately those opportunities don't often come on Knowledge Machine. What we get instead is a monochromatic set of songs that never vary much in dynamics or approach. Rest Your Head, the opening track, is the highlight of the album and is only mildly intriguing at that. Rest Your Head is ethereal, passive art-rock, and would stand out on a more varied album, but loses out in light of the sonic continuity of Static Of The Gods.

The more I listen to Knowledge Machine, the more I suspect the sound of the band is tailored to fit the vocal limitations of Jen Johnson, a constraint most bands face to one extent or another, but one might argue that the limits placed here aren't really fit to her voice at all. Johnsonis very competent within her comfortable range, but loses both pitch and tone in her upper register (Talk You Down, Mean Streak). On the other hand, White Flag is a high point for Johnson, although the sound is too static. And that's the big complaint about Knowledge Machine, the sound and dynamics on the album are just too constricted. As a listener this is a real turn off, lending to the impression that all of the songs sound the same. Some of the tunes (Talk You Down, Fire-Eater) want to rock but aren't allowed to, and much of the album falls into a bland somnolence that is catching.

Static Of The Gods has some real potential and real liabilities. Every band does, but I'd argue that neither are managed effectively on Knowledge Machine. Shoe gaze rock thrives on the disconnect from the outside world, but even the most avid shoe gazer has a heart beat and reacts to external stimuli they claim to ignore. This sense of vitality is missing from Knowledge Machine. My one wish for Static Of The Gods is that they get back in touch with their own beating hearts the next time around; the talent level here is sufficient to do some surprising things if this band ever plugs in.

You can learn more about Static Of The Gods at www.myspace.com/staticofthegods. Knowledge Machine is due for release March 23, 2010. Keep checking the band’s MySpace page for availability.