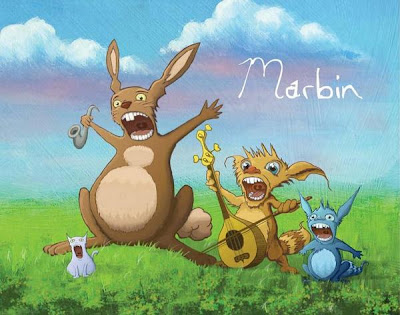 Chicago-based experimental jazz duo Marbin create out-of-the-box compositions using traditional forms and sounds that are anything bit. Closer to Pink Floyd than John Coltrane, Dani Rabin (guitar) and Danny Markovich (saxophone) defy branding with songs that range across genres. Forming in Israel, the duo was active there in parts of 2007 and 2008, before relocating. Since coming to Chicago, Marbin have worked with multiple Grammy winner Paul Wertico and appear on his album Impressions Of A City. Marbin released their self-titled debut EP in 2009.

Marbin opens with Abadaba, a mystic nouveau jazz offering big on ambience. Abadaba sounds more like a pensive rumination than an attempt at structured thought, evoking images of a gritty landscape and a sense of fractured peace underlying it all. Markovich takes the lead here in a style reminiscent of some of Sting's early forays into Jazz. Voice and guitar lead the way through Yodo, a lovely sidebar on the way to Mei. Mei is steeped in a dark beauty that conceals an uneasy edge just below the surface. The saxophone has a field day on Mei, driving through runs that would exasperate Miles Davis against the same sort of post-apocalyptic urban musical landscape.

Rabin takes center stage on Miyazaka, a brief but aesthetically pleasing composition that lilts its way into the more somber Crystal Bells. Crystal Bells plays out like a slow-growing, five-minute crescendo full of ambient synth, clockwork guitar and percussion and a melody that meanders pointedly above it all. Cuba finds Marbin blending Latin Jazz with a post-Modern pop sensibility, weaving adeptly amidst the surreal nature of the union. Darker contemplation returns on Rust, with distorted guitar playing out Jazz/Rock riffs over a straight Rock beat. The guitar work treads on some of the same territorial grounds as Eric Johnson here, but with a bit more chutzpah. Marbin closes with the bereft lullaby, Sleep Now, which carries an almost morose sense of peace.

Marbin is a challenging listen and a challenge to review. Marbin paints in musical oils, capturing the dark and half-light moments in music that is both thought provoking and uplifting at times. The instrumental work on Marbin is exquisite, and while the tone of Marbin isn't one to inspire huge Pop success, it's hard to imagine anyone not finding at least something to like here. That being said, Marbin is not the most accessible recording. Jazz and instrumental fans will stick around long enough to get into the good stuff, but pure pop fans with digital attention spans may not connect with Marbin.

You can learn more about Marbin at http://www.marbinmusic.com/ or www.myspace.com/marbinmusic.
Posted by Wildy at 7:16 AM