Review: Where's Lawrence? - The Boy In The Well 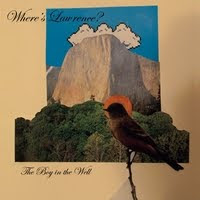 The Boy In The Well is a difficult listen between the relentless use of ABAB forms, cyclic and repetitive compositions and near stream-of-consciousness writing style. Two songs caught my attention of the eleven presented. Beauty Fell seems to carry an honest emotional intensity (perhaps even a desperation) that shines through the monotony that grows out of the general writing style used here. The Voice is of similar ilk, but comes late enough in the album that the relentlessly monochromatic presentation style overwhelms the nascent creativity. I am certain I missed the intended point of the album, but ultimately, Where's Lawrence? don't make it easy to cotton to. There are shining moments here hidden within some of the songs, but only the sturdy of heart and ear will find them.

You can learn more about Where's Lawrence at www.myspace.com/whereslawrence. Copies of The Boy In The Well are available through CDBaby.com, while downloads may be acquired from iTunes.
Posted by Wildy at 5:00 AM