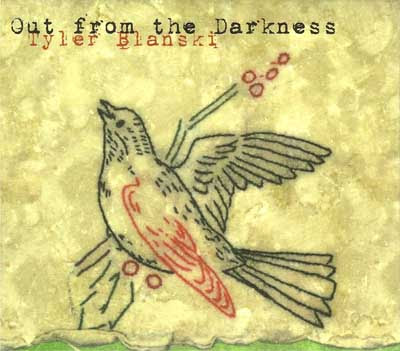 Tyler Blanski is a Minneapolis born and based singer/songwriter whose goal is telling stories in his songs. His muse seems to stem from the inspiration of artists such as Bob Dylan, Neil Young, Elliott Smith and even Jeff Tweedy. Blanski’s debut album, Out From The Darkness has been a work in progress since his earliest demo in 2006. Released in 2008, it may be a bit dated at this point, but is a fair representation of Blanski as an artist finding his voice.

Out From The Darkness opens with Two Inches Apart, the highlight of the album. Blanski's strong guitar intro serves as the backbone of the entire song, and is a beautiful thing heard through the ears of a guitar player. Blanski's lyrical style appears to be stream of consciousness and takes on a bland consistency early on. Out From The Darkness is a messy tune done in the style and tenor of Bob Dylan. It's a decent effort that gets bogged down in its own weight but shows some of the songwriting potential of Blanski. Hard Water is a tasty lilting tidbit that has a vaguely whiney feel (think REM meets Wilco). Whippoorwil is upbeat and driven with a lot of finesse shown on the acoustic guitar. It is also the musical outpost of the album, leading into a monochromatic and monotonous diaspora of songs lost in their numbing monochromatic sound. Much of the rest of the material on Out From The Darkness ranges from bland and innocuous to plodding cliché. The Sparrow tries to break free and fly with solid songwriting but gets lost in its own monochromatic sound. Laydee similarly tries to break the mold, picking up a more clearly Americana sound, but ultimately can't escape the inertia of the 2nd half of Out From The Darkness.

Tyler Blanski shows flashes as a writer, although lyrically he might benefit from collaboration, but he tends to get so mired in a single sound and style that he isolates himself from a lot of potential listeners. I'd love to hear Blanski take the songwriting talent that clearly exists and put it into use under slightly less serious and strident circumstances. Until then, Out From The Darkness is an interesting start.

You can learn more about Tyler Blanski at http://www.tylerblanski.com/ or www.myspace.com/tylerblanski. Blanski recently re-released Out From The Darkness digitally. It is available for free download from Blanski's web page, but donations are welcome. There is also an option to purchase copies on CD.
Posted by Wildy at 5:00 AM