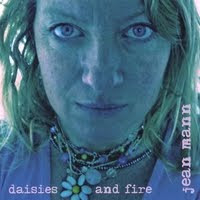 The Emerald City houses a number of musical gems. Jean Mann has been a fixture on the Seattle scene and across the northwest US since 2002. A favorite of Cyndi Lauper and Jacqui Naylor, Mann uses her angelic voice and cultured, urban tales to put listeners at ease like an old friend weaving stories over a cup of coffee. Mann's latest album, Daisies And Fire, combines an urban sophistication with melodic simplicity in an alt-folk mix comparable to that of Aimee Mann or even Ani DiFranco's less acerbic work.

Daisies And Fire opens with The Path, a pleasant, innocuous Folk/Pop confection that pleases but fades away like the afterimage of a flashbulb. Blue Soul offers a bit more to chew on; "I wonder what it's going to take to climb out of my heart". It's a song of mourning and loss peppered with the surety that better is to come. The melody and arrangement are both quite lovely. Daisies And Fire is vaguely reminiscent of Norah Jones' I Don't Know Why in the base arrangement, but differs thematically. It's a pleasant listen, although the ghost of Jones was there throughout for me. Two Birds is a heartfelt, melancholy tune that comprises Mann's darkest moment on Daisies And Fire. I expected there to be more tension in this song but it never quite materialized.

Blue Sky is dreamy Jazz/Pop that would have been right at home on 1970's AM radio and is among the better songwriting on the disc. On Pull Over, Mann explores the need to "stop and smell the roses", as it were. It's a well-written affair, high on the pleasantries meter but continuing in a vein that's perhaps a bit too consistent. Side By Side revels in the comforts and magic of established love, again going to the 1970's AM sound and blending it with hints of Country flavoring. The rest of the journey is relatively as it has been before, with the lone exception being Tide. Mann is the same, but the cello and guitar work some magic in this tune that would have been welcome elsewhere.

As a songwriter/performer on Daisies And Fire, Jean Mann is eminently likeable. Her voice is sweet, and even the darker moments in song seem harmless. There lies the rub. I'm not sure whether Mann challenged herself in the process of creating the album, but as a listener there was no challenge here. It's good to hear a songwriter who's comfortable with who, what and where they are, but the occasional risk would add some much needed spice to a pleasant but conventional folk/pop album.

You can learn more about Jean Mann at http://www.jeanmann.com/. You can purchase Daisies And Fire as either a CD or Download from CDBaby.com.
Posted by Wildy at 6:02 AM