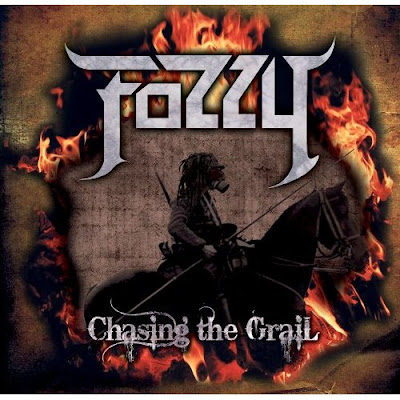 Fozzy has a long and inglorious history. Started as an Ozzy Osbourne cover band (Fozzy Osbourne) by members of Stuck Mojo, the band had a fateful meeting with WWE star Chris Jericho after a wrestling event in 1999. Jericho sat in with the band for a few shows but thought nothing serious of the collaboration. An ankle injury in 2000 that sidelined Jericho from wrestling brought him back to the band on a permanent basis. In the early days, Jericho performed as Mongoose McQueen, and Fozzy worked with a back story of having worked for twenty years in Japan under a music craft. Returning to the US, Fozzy found that a number of their songs had been "stolen" by major acts. Consequently, Fozzy's first two albums included covers of major rock and metal acts of songs supposedly written by Fozzy. In recent years Fozzy has moved to original material, gaining significant critical acclaim from the Rock media establishment that's lead to significant album sales and world tours. In January of 2010, Fozzy released their fifth album, Chasing The Grail. It's their best yet.

Fozzy opens with Under Blackened Skies, sounding like a cross between Metallica and Ozzy Osbourne. Under Blackened Skies is both tremendously aggressive and musical at the same time; high powered heavy metal with enough polish to reign on the Modern Rock charts as well. Martyr No More, chosen as a WWE theme for Wrestlemania, is built on a delicious riff. The song has great energy and a chorus that's pure, classic Rock N Roll. Grail features some delicious guitar work that can only be described as aggressively melodic. Grail is a powerful tune with something of a morality tale woven in.

Broken Soul is the sort of Pop-Inflected metal anthem that tops charts, launches sold-out tour and otherwise saturates airwaves until you can't even stand to hear the opening three notes of the song. Its tremendous songwriting with big harmonies a sing-along chorus; a certain Top-10 hit (at least). On Let The Madness Begin, Fozzy heads back to the abyss with a heavy melodic rocker loosely about temptation, spiritual warfare and giving in to our darker selves. The song is very catchy memorable and rocks like nobody's business. Pray For Blood is a big radio-oriented rocker that borders on mess but never really disintegrates. The song is strong from the perspective of sound and fury but lacks the cohesion that Fozzy displays on most of Chasing The Grail.

New Day's Dawn turns out to be a tough transition, with Jericho singing in a falsetto voice in an arrangement that's thoroughly out of character with the rest of the album. Rather than playing as a respite or illustrative diversion the song serves as a jarring slam on the breaks on a runaway train no one wants to stop. Fozzy gets a measured start forward with God Pounds His Nails, a powerful but trite song about the inevitability of life and consequence before sliding through the formulaic and bland Watch Me Shine.

Fozzy returns in full force on Paraskavedekatriaphobia (Friday The 13th), with flailing guitars, Metallica-style drum beats and a vocal line that explodes like a cannon-ball. Revival slows things down a tad for a heavy ballad that comes from the Ronnie James Dio/Sabbath school of Rock N Roll. Revival is full of hope; a jettisoning of the bad karma of Let The Madness Begin. Rich Ward's guitar work is creative and intricate, and the rhythm section of Frank Fontsere and Sean Delson fills the song with a driving menace. Fozzy closes in revelatory fashion with Wormwood, a nearly-fourteen minute mini-opera about the end of times written from the perspective of one who witnesses the spiritual wars accompanying the tribulation. The song is powerful and disturbing, transcending its genre to an uncomfortable art form. It's actually quite a wonderfully unsettling creation that adheres to the events detailed in the Book of Revelation and sets them against a dark and creative Progressive Metal arrangement.

It's often the projects that start out as an outlet that turn into something big. Fozzy started as a knock-off cover band for established musicians from Stuck Mojo; a play-thing to create a sense of musical balance that was fun and a step away from their day jobs. A decade later, you could argue that Fozzy is one of the more innovative (and commercially successful) metal bands stomping the floorboards of stages the world over. Chasing The Grail is the definitive work from a band whose arc is still rising. It's easy to imagine Fozzy one day taking their rightful places in Cleveland. The scary part is they just keep getting better.

You can learn more about Fozzy at http://www.fozzyrock.com/ or www.myspace.com/fozzytour. You can purchase Chasing The Grail as either a CD or Download from Amazon.com.
Posted by Wildy at 5:20 AM

umm theres a mistake its there 4th not 5th

Fozzy rules and this cd is the best .I love it all .