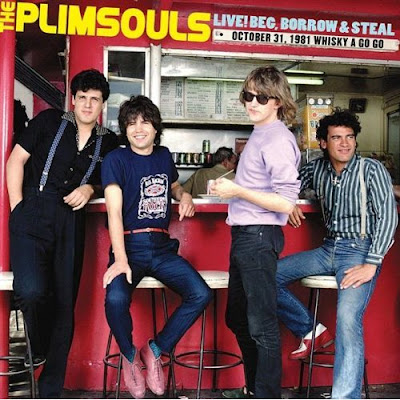 The Plimsouls grew up in the vibrant Rock N Roll scene of Los Angeles in the late 1970’s. Led by singer/songwriter Peter Case, The Plimsouls managed moderate commercial success based on strong airplay in L.A. before landing the song A Million Miles Away on the Valley Girl soundtrack in 1983. The Plimsouls broke up in 1986, seemingly for good, but have reunited from time to time over the years. In February of 2010, The Plimsouls released Live! Beg, Borrow And Steal, an audio document of one of the band’s seminal live shows.

Live! Beg, Borrow And Steal contains the sort of no-frills, straight ahead Rock N Roll that made the Beatles media darlings on both sides of the Atlantic. The Plimsouls practice their highly melodic Rock N Roll on a Los Angeles crowd on Halloween 1981, with Peter Case at the top of his vocal game and the band hitting on all eight cylinders. The influence of 1960's Brit rockers is stamped all over Live! Beg, Borrow And Steal. Highlights include the energetic roots rock of Hush Hush, the driven, excitable garage Rock of Sorry and the raucous Women. There really aren’t any slow moments here, as the Plimsouls rocked with abandon and provided a truly high-energy, entertaining set. Other songs of note include the Beatles-influenced Shaky City, A Million Miles Away (later covered by the Goo Goo Dolls) and Zero Hour.

The Plimsouls knew how to rock back in the day. Live! Beg, Borrow And Steal captures a dynamic band at the height of their powers. Unlike many live CDs, this one will leave you wishing you were there.

You can learn more about The Plimsouls at www.myspace.com/plimsouls or http://www.petercase.com/. You can purchase Live! Beg, Borrow And Steal as either a CD or Download from Amazon.com.
Posted by Wildy at 2:15 PM

Really effective information, much thanks for the article.