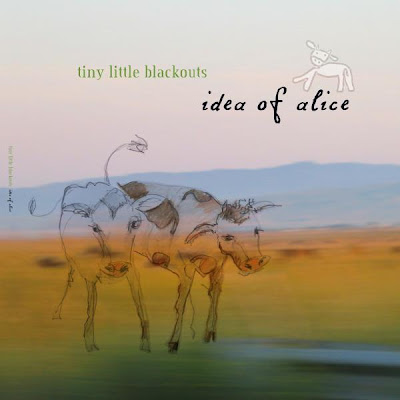 San Francisco's Tiny Little Blackouts slip through the cracks of your mind with a low-key style reminiscent of Mazzy Star or The Cowboy Junkies. Vocalist/guitarist Cameron Ember has only been playing guitar for a couple of years, but shows an ability to craft songs of significant emotional and intellectual weight with melodies that compel. Tiny Little Blackouts just formed in 2009, and have already released their debut album, Idea Of Alice.

Idea Of Alice opens with the laid-back Lamb44; a somewhat dissociative yet compelling song. Ember has a lovely voice; lyric with enough mature alto in the sound to lend it some weight. Wrecking Ball maintains the imperturbable countenance of Tiny Little Blackouts, dashed with healthy doses of angst and need. The arrangement is full of sound but unimaginative. Cherry Blossom is obtuse and difficult to follow. The energy here is a tough sell as well. Ditto Angry Santa, which relies on strong arrangement and a pleasant vocal line from Ember, but the two mix with less-than-exciting results.

Lamb68 takes a slightly different sonic path than the opening track, although the essential melody and effects don't change. The song is nice enough, but substantially similar to the original version that opens the album. You're Too Nice plods as it cajoles, bringing minds together if not hearts. Tiny Little Blackouts close with Winter In Our Hearts, Cameron Ember's best vocal performance on the album. The lyrics are full of imagery that runs toward the indecipherable.

You can learn more about Tiny Little Blackouts at www.myspace.com/tinylittleblackouts or http://www.tinylittleblackouts.com/. You can purchase Idea Of Alice as either a CD or Download from CDBaby.com.
Posted by Wildy at 5:00 AM

Just discovered them a week ago. You're right, they're showing a lot of promise. The songs are very melodic, even though the lyrics could use a little improvement. I'm looking forward to their future works.