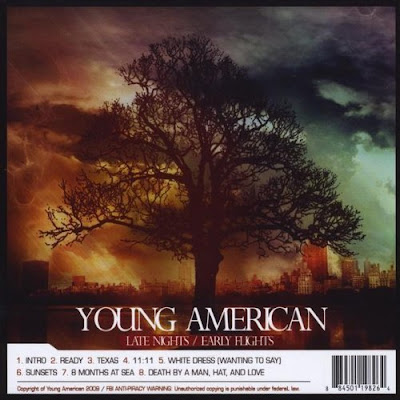 San Antonio is the home to Young American, an outgrowth of local bands Rounding 3rd, Texas/Texas and My Adversary. The hard-charging trio consists of Jason Harari (vox/guitar); James Perez (guitar) and Alex Kosub (bass), accompanied by whatever drummer catches their collective fancy at a given time. Young American's debut album, Late Nights/Early Flights, plays the middle of the road with rhythmic Rock and Roll that doesn't bowl you over but hangs around until you notice it.

After the bland Intro, Young American digs in with Ready, an energetic rocker with an emotive vocal line. Vocalist Jason Harari reminds me vaguely of Adam Duritz in a lower register. Texas has decent energy but lacks a cohesive feel; more reflective of an off-the-cuff writing style. The theme of returning home is a classic one, but has been done so many times (and better) that Texas just fails to stand out. 11:11 is another matter altogether, a ballad with a not-so-happy ending that might have real commercial promise. This is the highlight of the album and could be an indication of the writing possibilities of the band when they click. White Dress (Wanting To Say) is a strongly commercial track on sound, but doesn't have quite the same substance as 11:11. The feel here is more toward the Modern Rock side of the spectrum. Young American offers up three more tracks: Sunsets, 8 Months At Sea and Death by Man, Hat and Love, all of which are decent enough but not particularly memorable.

Young American shows a real high side of Late Nights/Early Flights, but turns what would be a very strong five-track EP into an above-average eight song album. The combination of Harari, Perez and Kosub show a lot of promise, creative some magic when everything clicks. The next album should tell whether they've fully gelled in their collective creative abilities. If they have, the results could be dynamic. For now, Late Nights/Early Flights is a good start.

You can learn more about Young American at www.myspace.com/weareyoungamerican. You can purchase Late Nights/Early Flights as either a CD or Download from CDBaby.com.
Posted by Wildy at 6:33 AM