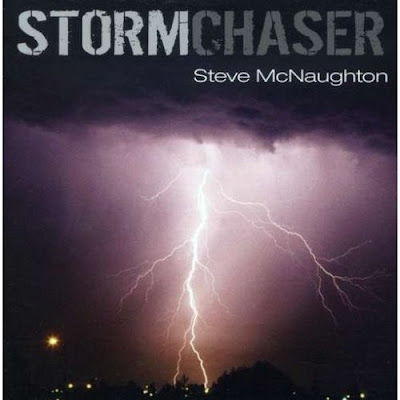 Sydney, Australia's Steve McNaughton has gained a certain amount of security in his career as a performer and songwriter. He is a regular of the Big Backyard Samplers; his songs have garnered airplay in Australia, Europe and the US, and his songs have been covered by established artists in Australia and elsewhere. McNaughton has had several songs achieve minor hit status, but still lacks that one big breakout album or song. McNaughton makes his next run at that big break with his latest album, Storm Chaser.

McNaughton opens with the title track, full of decent sound and movement. Storm Chaser comes off as a bit awkward in the lyrics department but works nonetheless. McNaughton seems to struggle on the lyrics side of things throughout Storm Chaser, creating solid rock arrangements that are help back by weak and periodically awkward attempts to glue phrases together that often don't quite fit right. The Devil's In The Detail is a fine example; a strong musical offering featuring trite, almost sophomoric lyrics. Don't Tell Mama is a catchy and cute tune, done up in Motown styling. It's a personal favorite from Storm Chaser but may not play as well to the general public. On Crawl Before You Walk, McNaughton keeps the 1960's flavor while flipping over to the Pop side of the spectrum. The melody and arrangement here are solid. The best track on the disc is the bluesy Dreaming. McNaughton opens up with the six-string and shows off some exciting solo work.

Storn Chaser doesn't so much fall apart at this point as simply wind down. Ode To Odette is a decent offering with a Caribbean feel that is built on a solid sound but continues with the awkward lyric marriage. Things get bland enough that even a cover of Eagle Eye Cherry's Save Tonight can liven things up much. McNaughton closes out with Eyes Of A Child, a look back at the glory days of youth. The song is a bit hokey and repetitive in the chorus but has its merits.

Steve McNaughton scores some definite points with Storm Chaser and winds up with a solid if not earth-shattering album. McNaughton definitely has an ear for melody as well as for enjoyable and solid Rock arrangements, but struggles enough on the lyrics to his new songs that a collaborator might be advisable in the future. Storm Chaser is worthy of some of your time, bumps and all.

You can learn more about Steve McNaughton at http://www.stevemcnaughton.com.au/. You can purchase Storm Chaser from Waterfront Records
Posted by Wildy at 4:55 AM