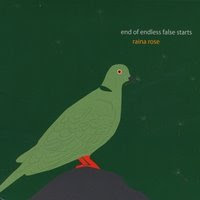 Austin, Texas’ Raina Rose is an Indie folk singer/songwriter who has garnered a fair amount of attention through her first two albums. With a fairly traditional approach and extensive touring, Rose's following has grown to a point where the right spark could catapult her to much larger stages. In 2008, Rose took a step in that direction with the release of her third album, End of Endless False Starts. Stepping away from the traditionalist folk bent that defined her early career, Rose made the brave choice to incorporate other influences (Rock, Drum N Bass, instrumental minimalism, etc.) into her songs. The result is a breathtaking and ultimately moving album where the listener is transported to a world of Roses' choosing; where the walls are notes and staves and the windows are the lyrics that illuminate.

End Of Endless False Starts opens with Are You Still In Love With The World?, a musical gut check about what happened to the enthusiasm of youth. The song is lyrically dense and plays around the concept of the middle age crisis, becoming an admonishment of trading in hope for security. Kings Flashlight is a poignant song about the need most of us feel for our "other half". This is a great bit of Folk/Pop songwriting, and really shows off Raina Rose's warm, beautiful voice. Blind Cyrus is a song about loneliness and about persevering through more difficult times life throws our way. The arrangement on this one is perfect.

Air & Water is one of my personal favorites here, a song about falling in love like falling off a log; helplessly and full of exhilaration. The River shows hints of an Ani DiFranco influence and is probably the best songwriting on the disc. The guitar work alone would be worth listening in for. This Ain't My House caught my attention on the first listen to End Of Endless False Starts. The song is very powerful and bleak, reflecting a great deal of turmoil in the roiling arrangement. It ranks up there with The River but is much darker in aspect. Make sure you also check out Not My Love, Starts With A Low Hum and False Start.

Raina Rose is distinctive in songwriting style, matching up a distinct and visceral honesty with a somewhat quirky worldview and a homey story-telling style that sets the listener immediately at ease. Her voice will suck you in and keep you listening even if the songs themselves don't catch you. End Of Endless False Starts was a pleasant surprise, the sort of album you expect out a long established Folk/Rock artist with a reputation as a songwriter. The future's looking mighty bright for Raina Rose.

You can learn more about Raina Rose at http://www.rainarose.com/ or wwwmyspace.com/rainarose. You can purchase a copy of End Of Endless False Starts at www.cdbaby.com/cd/raina3.
Posted by Wildy at 6:16 AM