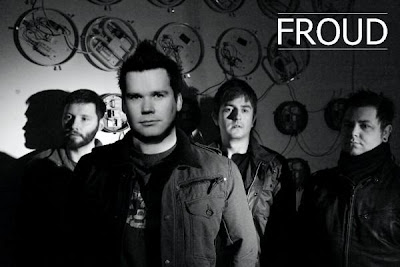 Froud has its roots in Wexford, Ireland, but those roots extend into the crossroads of Carrickmacross, Kilkenny, Swords and Athlone. The next big thing out of Ireland has already created a fair amount of buzz with their debut single, Nostalgia. With US licensing deals and a #1 single on the Irish Independent Download chart, Froud has attracted accolades from Skope Magazine (Artist To Watch) and featured on The Eclectic Show and Swept Away TV.

Nostalgia opens with the title track, a big hook-filled rock tune with a soaring chorus. The vocalist, Martin O'Neill is a pleasure to listen to and I wouldn't be surprised to find that this song had already been licensed for television placement. Open Eyes tries to bring back the big rock anthem. Built around great guitar hooks, Open Eyes harkens back to the days of 1970's heavy rock. Froud finds a killer sound here that's also danceable. Lair is the highlight of the disc, allowing O’Neill to really show off his pipes. Lair is a wonderfully dark, down-tempo song built on major progressions with minor-key accents. While this isn't commercial radio material, it's the sort of song that can help a band build a dedicated core following pretty quickly.

Froud is an old-school rock band for the third millennium. The ability and willingness to step out of ABAB or ABACAB song construction and do it well opens up numerous avenues to creativity for a band. Froud seems to do this as easily as breathing. Be sure to check out Nostalgia. You'll be hooked from the opening notes.

You can learn more about Froud at www.myspace.com/froudmusic. Nostalgia is available as a download from iTunes.
Posted by Wildy at 5:10 AM

What namely you're saying is a terrible mistake.