Review: The Crazy Ivans - Go Back To Russia, Sucka 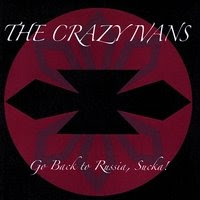 Dallas, Texas is ground zero for The Crazy Ivans, a sextet with big dreams and even bigger questions about just who they are. Biographical information about the band is next to impossible to find, but we do know that the band grew out of the streets and clubs of Dallas in June, 2008. Named for a submarine maneuver used during the 20th century to help a submarine crew to see behind the submarine using sonar, The Crazy Ivans look back in mixing sounds ranging from classic, arena rock to punk, and look forward with an edge that is truly post-modern. Their debut EP, Go Back To Russia, Sucka, was released this year. Let’s check it out.

Go Back To Russia, Sucka opens with Frequency, a bit of hyperactive Grunge/Punk. Lead vocalist Kristen Lueken sounds a bit like Rush’s Geddy Lee here. The song is really a fun listen and is a great way to kick off the EP. Still Waters surprises with some arena rock style harmonies blended into what is just a great rock tune. Can’t Go Home takes things down a bit as a mid-tempo bad girl song. The energy just didn’t make it to the CD on this one, leaving it with a ho-hum feel that doesn’t match the “I’m going to be a bad girl” message. Wail Of The Banshee is everything you might expect for the title, and Lueken gets to belt for all she’s worth here. This is a bit rougher than the first few songs, and that sound carries over into the last track, Six Feet Above The Sheets. It’s here that you realize what a treat The Crazy Ivans must be to see live.

The Crazy Ivans get in some good shots on their first recording project together. Go Back To Russia, Sucka introduces us to a band that has an idea of where their sound is going but hasn’t really refined that sound yet. The result is an intriguing and somewhat varied EP that’s highly listenable and entertaining. Get your moshing shoes, your punker tee and your best snarl ready, The Crazy Ivans will make you dance.

You can learn more about The Crazy Ivans at http://www.thecrazyivans.com/ or www.myspace.com/yecrazyivans. You can purchase a copy of Go Back To Russia, Sucka at www.cdbaby.com/cd/crazyivans.
Posted by Wildy at 6:35 AM

Thanks for the kind words, man! We're looking forward to getting you a copy of our full-length album, coming out this Fall!