Review: Foggy Nocean - Why Do Cows Have To Taste So Good? 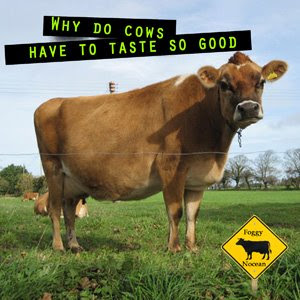 Foggy Nocean – Why Do Cows Have To Taste So Good?
2009, Ron Mancini

Ron Mancini is the heart and soul of Foggy Nocean, the last bastion of anti-pop heroes on the Rock N Roll scene. Cranston, Rhode Island is a bit out-of-the way, and don’t be surprised if you don’t hear about it again (unless you live in Rhode Island), but it has the seeds of musical revolution in Foggy Nocean. Mancini rails against the music industry on his website, bemoaning the loss of creativity and music as a force for change in the world. Foggy Nocean certainly don’t fit the current mold of Poplets. Taking his cue from classic rockers such as The Doors, Grateful Dead, Bob Dylan, The Rolling Stones and The Kinks, Mancini constructs entire albums as organic creatures, rather than highly vetted, highly focus-group studied pop confections designed for maximum impact. Working in a wicked sense of humor and a quirky eye for the world, Foggy Nocean’s Why Do Cows Have To Taste So Good? is politically, fashionably and aerodynamically incorrect (thank you Berkely Breathed), but that sucker can fly.

The title track, Why Do Cows Have To Taste So Good?, sounds like Randy Newman sitting in on vocals with They Might Be Giants. If that doesn’t intrigue I suggest you go back and read the previous line until it does. It’s a love song about all the things a cow can become (generally involuntarily). Shattered Image in an upbeat parable for looking to yourself for problems before blaming others. The song is well produced and yet maintains a Lo-Fi, garage aura to it that’s charming. You could picture this as the response to an argument with a significant after the fact. I should say about Mancini’s voice that it isn’t a perfect voice; it works really well with some songs/styles and occasionally doesn’t with others. All Those Things is one of the songs where it doesn’t quite work, which is unfortunate as the song is excellent from a musical perspective. Hurting Me sounds a bit like The Who’s Magic Bus on the verses and has a classic punk chorus. The vocals here are amiably off key and the song itself is very catchy. The piano and guitar work here is absolutely stellar.

Lay Your Hands and 13 Colonies both find Foggy Nocean sounding like Elvis Costello of the late 1980’s. Lay Your Hands is the best songwriting on the disc, coming across with a distinctive 1980’s Pop sound while retaining that Lo-Fi grandeur evident elsewhere on the album. 13 Colonies is a bit of fractured US History delivered with great energy and the panache of a real performer. Capn A Ship is upbeat and highly energetic, a young boy’s dream that’s never fully outgrown. You Don’t Know How Much I Care and Steppin Stone were both enjoyable, and The Foreskin is an absolutely unforgettable closer; a plea to remain whole that most any man who’s been circumcised can find sympathy with. The song perhaps isn’t quite as funny as intended, but should do well with the adolescent crowd.

Foggy Nocean practices one the greatest tenets of Punk Rock; “Here’s our music. If you don’t like it, go XXXX yourself”. If you don’t believe me, go read the bio of Foggy Noceans website. Ron Mancini is a guy who makes music he likes; he hopes you like it too, but he won’t be heartbroken if you don’t. Like most musicians who do what they do because their hearts can’t bear to do anything else, Mancini would still be making music if there was no hope of money or notoriety involved. Those things are nice, desired, sometimes needed; but they are not essential reasons why he or other artists like him make music. Why Do Cows Have To Taste So Good? is an experience. It’s a Rock album in the truest sense of the phrase. Not every song here will work for everyone, but there’s something here for most anyone who might listen. Foggy Nocean isn’t like ever to take the airwaves by storm, but they’ll provide you with some great entertainment, 47 minutes at a time.

You can learn more about Foggy Nocean at http://www.fnmmusic.com/ or www.myspace.com/foggynocean. You can purchase a copy of Why Do Cows Have To Taste So Good? at www.cdbaby.com/cd/foggynocean.
Posted by Wildy at 5:00 AM

Labels: Berkely Breathed, Bob Dylan, Elvis Costello, Foggy Nocean, Grateful Dead, Randy Newman, Ron Mancini, The Beatles, The Doors, The Kinks, The Rolling Stones, The Who, They Might Be Giants