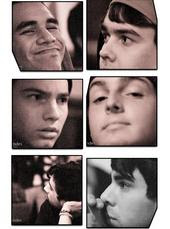 North Hollywood, California experimental rock quintet The Alternates are young and hungry. Each member is 19 years old and they have been together since their high school days. The Alternates have already made the L.A. scene their own, playing to packed houses at such venues as The House Of Blues, Whiskey A Go Go, The Dragonfly and BB King’s Blues Club. The band is developing a strong reputation as a live act, and beginning to develop material for an album. Today we’re taking a look at The Alternates’ Four Song Demo.

The Alternates open with Changing Course; the highlight song of the disc. There's a Garage/Folk/Rock feel to the recording that strikes a vague resemblance to a theoretical jam session involving The Lowest Of The Low and The Police. The other three songs, Should Have, Who Can You Trust? and It Seems Useless were pleasant but didn't really stand out from the crowd. That's the general story for The Alternates' demo CD; it's pleasant but doesn't really inspire me go back and listen again. Don't get me wrong, I think The Alternates have something, but the material here just feels too comfortable. There's an inherent edginess under the surface of The Alternates that comes closest to the surface on Changing Course but then disappears almost completely. When The Alternates can find and harness that creative core they're going to be something to hear.

You can learn more about The Alternates at www.myspace.com/thealternates.
Posted by Wildy at 5:00 AM

Labels: The Lowest Of The Low, The Police

You know this cover reminded me of The Beatles "Let It Be" cover on first glance? lol. Cool.