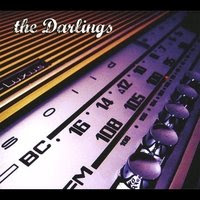 Coming out of the same South Bay (Los Angeles) music community that produced Black Flag, the Descendents, the Circle Jerks and Pennywise, The Darlings carry a distinct punch-to-the-gut toughness that has always gone with Punk Rock. DIY to the core, The Darlings have already put in road time as part of the 2008 Vans Warped Tour and in support of acts such as Social Distortion, Bad Religion, Guttermouth and the Circle Jerks. Currently on tour with Pennywise to promote their debut EP, The Darlings, the band hopes to be taking the first step toward joining the pantheon of great South Bay Punk bands.

The Darlings opens with Captivated, a crunchy pop rocker in the style of 3 Doors Down. It's in this kind of granola rock state that the Darlings seem to live; edgy enough to make it to the modern rock play lists but earthy enough to be considered cool by folks who keep "Modern Rock" at arm's length. It's Gone has a lively, radio-friendly air about it although it gets a bit repetitive in spots. Lacerate is probably the strongest track here, with a distinctive 1980's pop/rock sound and a strong vocal line. Dead Light, What Lies Below and Cruel World are all fairly average for the genre. The closing track, Love Story, has real potential, but gets stuck in a bit of a rut. It's a song about love wrapped around a well-meant but blatant innuendo that's neither subtle enough nor well-embedded enough to be considered sweet.

The Darlings have a sound that commercial radio will jump all over. The songwriting is decent and shows flashes of being something more but is perhaps a bit too forced to flow freely. The Darlings is a good start; it won't knock your socks off but you'll pull this disc out and play it once in a while.