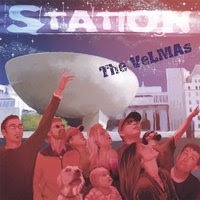 Albany, NY power trio The Velmas know how to Rock N Roll. Todd “Figaro” Minnick (bass), Mike “Harvey” Grosshandler (guitar) and Michael “Bruce” Bruce (drums) share songwriting duties, blend Rock, Punk, Classic/Southern Rock, Country, Reggae and Grunge into a dynamic sound that’s won rave reviews from critics and fans alike. The Velmas have been the alt-rock darlings of the Albany scene for a few years now and have played all over the Northeast US. Their most recent album, Station, achieved national distribution and the band has slowly been building a presence outside of their home market. Let’s check out Station.

The album opens with the smooth Modern Rock sounds of One More Day, gaining some pop sensibility as The Velmas transition into This Time. Regardless of the pop orientation, the first few songs on Station sound a bit too calculated to hit the Modern Rock market. The Velmas have everything gel on Tell Her I Love Her, a Weezer-esque pop/rock tune about unrequited love. Tell Her I Love Her has strong commercial potential and is the sort of song that can vault an unknown band into national prominence on short notice; it's just a question of getting it heard in the right venue. Midnight sounds like something that could have come right off the Rent soundtrack, and is probably a favorite at club shows where midnight is half time. Where'd She Go might be the best tune on the disc; it's just flat out, great Rock N Roll. Be sure also to check out Silenced, Forever With Me (Emily's Song) and Past Tense on the way to The Velmas' cover of Lionel Richie's Hello. Say what you want, but it's a good, Daughtry style cover of the song.

The Velmas play in a small pond right now (Albany, NY) but show the sort of talent and panache it takes to make it in a bigger market. Station is a strong effort that's worth checking out. It finds The Velmas playing with mixes of Pop, Rock and Post-Punk that work more often than not. My suspicion is that if they keep playing in that realm sooner or later they might just strike gold.

You can learn more about The Velmas at http://www.thevelmas.com/ or www.myspace.com/thevelmas. You can purchase a copy of Station at www.cdbaby.com/cd/thevelmasccr, or you can download the album from iTunes.
Posted by Wildy at 5:30 AM