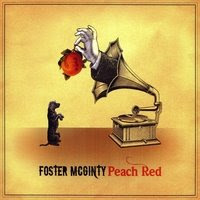 Foster McGinty's roots are deep in the Missouri soil of Cape Girardeau, but he's a New York City boy these days with the Rock N Roll swagger to match. Deeply introspective as a lyricist, McGinty brings a guitar style that's been compared to the theoretical love child of Jimi Hendrix and Eric Clapton's Cream. McGinty has established himself in the New York music scene with headline performances at Kenny's Castaways and The Bitter End, but has traveled all over the US en route to where he stands. With Peach Red, McGinty establishes himself as something fans have known him to be all along, a rock star.

Indeed, McGinty embraces the same fusion of Rock and Blues that drove folks like Hendrix, Cream and even Led Zeppelin to stardom. Opening with Can’t Help But Shine, McGinty even shows elements of Funk in his Blues/Rock mix. The guitar work throughout the album is excellent. 10 Moons sounds like it was heavily influenced by Hendrix and is the sort of song that a classic rock cover band would latch on to with relish. McGinty gets into a more hard-nosed, Southern Rock sound on Dream Catcher, perhaps the best written track on the disc, but the aural highlight is Burning Bee Hive. The Hammond Organ and bass guitar steal the show on this one, mixing it up below the guitar line to create some wonderful musical and rhythmic wizardry. You’ll also want to check out Turqoise, Circus Mind and My Time Of Uncertainty.

Foster McGinty plays like a rock star. His guitar chops are unquestionable. The songwriting here is a bit uneven at times, but no duds can be found among the ten tracks presented here. Peach Red is a fun introduction to a man who remembers, or at least has recaptured, what it was like to play Rock N Roll in the late 1960’s and early 1970’s. Foster McGinty offers us a bit of musical history on Peach Red; updated for today, but none the worse for wear.

You can learn more about Foster McGinty at http://www.fostermcginty.com/ or www.myspace.com/fostermcginty. You can purchase a copy of Peach Red at www.cdbaby.com/cd/fostermcginty2.
Posted by Wildy at 6:04 AM