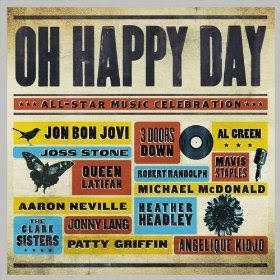 So the idea is that you take a selection of classic Gospel tunes, a cross-section of popular Gospel artists, and pair them with big name artists from the popular music realm. I was skeptical of this when I first read about, because some of the pop artists involved were ones I never would have thought of being on a Gospel tribute album. The collection is called Oh Happy Day and was released earlier this year on EMI Gospel Records. Suffice it to say that there are some pleasant surprises here as well as some puzzling and downright disappointing efforts here.

Oh Happy Day opens with Johnny Lang & The Fisk Jubilee Singers on I Believe, a funk-driven gospel work with great blues guitar work and an absolutely inspired vocal from Lang. This is the perfect opening to the album, as Lang brings all the energy of a revival meeting right from the opening notes. I wasn't certain what to make of 3 Doors Down being included here, but their version of Presence of The Lord with Soul Children of Chicago was solid. Robert Randolph & The Clark Sisters break out some rocking 1970's electric blues on Higher Ground. The energy here is over the top and through the roof in the best Gospel tradition.

Perhaps the biggest surprise of the album is Jon Bon Jovi's Keep The Faith with the Washington Youth Choir. This is a different side of Bon Jovi than I've seen before, fitting his voice into the Southern Gospel/Blues style like it was a second skin. I wasn't impressed with Al Green & Heather Headley's People Get Ready. Vocally their performance is impeccable, but the song is a call to action and the energy level on this rendition reflected anything but; sounding more like a lullaby than reveille. Perhaps the most anticipated duet on the album is Waiting For My Child To Come Home, featuring Mavis Staples and Patty Griffin. Neither singer disappoints, as the mix of their voices together is downright heavenly. Michael McDonald teams with the West Angeles Cogic Mass Choir on Storm Before The Calm. I personally have never been a big fan of McDonald, but he gives a solid performance here.

Angelique Kidjo tackles Bob Marley's Redemption Song with the best vocal performance on the album, although the song itself is a questionable inclusion on a disc of Gospel tunes. Aaron Neville is Aaron Neville on A Change Is Gonna Come. The title track features Queen Latifah and Jubilation performing in a mid-tempo, lyric style. Latifah gives a moving performance but doesn't open the song the way some might. The album closes out with a true wow moment. Joss Stone and Buick Audra pair up on This Little Light Of Mine. Each singer is a vocal powerhouse in her own right, and they manage to not try to overpower one another here. The acoustic blues arrangement is topper, featuring harmonica work that is worth the price of the CD on its own.

Oh Happy Day is a pleasant surprise. While not quite expecting a disaster, I was highly skeptical that the concept would work going in. It not only works but excels in opening up a genre of music that is often shunned in the popular realm and showing us aspects of a few performers we might not have seen before. Make sure you take some time to check out Oh Happy Day. You'll be glad you did.

Oh Happy Day is a Walmart Exclusive release. You can pick it up in any Walmart store or at http://www.walmart.com/, or you can download the album through Amazon MP3.
Posted by Wildy at 5:00 AM