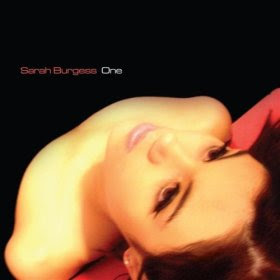 You may remember Sarah Burgess as a Hollywood-bound contestant from American Idol (2007). She got a golden ticket from the judges but then a quick ticket home from Hollywood. The issue wasn't a lack of talent but of perhaps a lack of polish at that time. Sarah Burgess has a pleasant voice to listen to, and with the right material could be quite successful. One is an ambitious step forward, but it begs the question of whether this is the right material for Sarah Burgess.

Sarah is at her best on Heart Of Me and Whatever's Written In Your Heart, where she can lay down all the pretense of the pop-shop sound of much of One. Unfortunately these two songs are buried at the end of One, and many listeners may never get there. If you are looking for the sort of pre-packaged post-Britney pop/dance regurgitation, then One is for you. If you are looking for the musicality and voice that Sarah Burgess is capable of, then you look to the last two tracks and hope for the next record.

One is not a bad album for what it is, but it's disappointing because it could be so much more. Its formulaic pop/dance music targeted for pop radio/MTV. Like all singers, Sarah Burgess' voice has its flaws and limitations. The production here is faulted for highlighting them rather than working through song choice and sound development to maximize her sound. This is not in any way a negative criticism of Ms. Burgess - this one is wholly on the production team.

For what it's worth, it sounds like Sarah Burgess might have found her sound, her comfort zone, on the last two tracks here. Hopefully this will open doors for her musically for future projects, because she really is quite talented and a pleasure to listen to. As for One, it is listenable, but not memorable outside of the last two songs.

You can learn more about Sarah Burgess at www.sarahburgessmusic.com. You can currently download the album One at Amazon.com or through iTunes.
Posted by Wildy at 5:26 AM