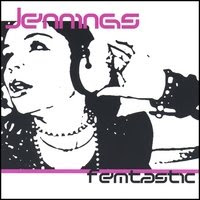 Mary Jennings is a very talented young lady. She has this big, gorgeous voice that is full of timbre and character and makes you want to listen over and over again. Femtastic is a very interesting project that mixes traditional rock instrumentation with electronic elements to create a modern "wall of sound". This works more often than not on a debut CD that is uneven, but at times brilliant.

Much of your opinion of Femtastic is going to depend on taste. There is some great songwriting here, but at times the clarity of songwriting becomes lost under the weight of layers of sound. Falling Higher is a prime example of this dynamic. The song itself is a pure pop ballad, but is overrun with electronic gadgetry and fuzzy sound that detracts from the singer and the song. As You Breathe is another example, where the base song itself is beautiful, but just became too busy in the recording process.

Falling Higher is perhaps the class of the album, although I enjoyed the "stripped" version on the bonus disc even more than the full recording. Some versions of the CD include a second disc (Femtastic stripped) with 6 songs. Here the singer and song have the opportunity to shine through the effects and sounds and you begin to see how truly talented Mary Jennings is.

Femtastic itself is an excellent album full of great songs and great promise, but where the production values get in the way of the music at times. The inclusion of the stripped disc confirms this opinion, and gives the listener a glimpse of what Jennings is capable of.

The myspace is actually www.myspace.com/jenningsmusic. Thank you so much for the kind words! You are awesome!

Thanks, Mary. I corrected the link in the review.