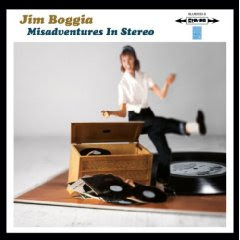 Jim Boggia is a self-proclaimed music geek. You know the type – the guy in college who only separated himself from his guitar to go to class if there was a test. Or the guy who fawned over a new sound he’d discovered for days trying to see what else he could draw out of it. A lot of these guys get lost in the self-reflexive thought process and spend years creating sounds but little that could be called music. Then there’s the occasional guy like Boggia, who learned somewhere along the line to channel that wonder with sound into the creative process. Jim Boggia’s third album, Misadventures In Stereo drops on August 5, 2008, and it is a thing of beauty.

Jim Boggia's voice sounds like that of a young Rod Stewart. I spent several listens on this disc trying to figure out why his voice sounded familiar before I figured out why. Stylistically they're nothing alike, and the similarity is a little loose, but it's enough to create a comfort with his voice that's part deja-vu and part respect. Boggia can sing and emote with the best of them. Misadventures In Stereo is a breath of fresh air. Johnnie's Going Down is a catchy song that will get stuck in your brain. To And Fro is a frantic acoustic rock song that owes its roots to the Beatles. Boggia seems to have a gift for picking strings from popular music and creating something completely new from familiar themes, sort of like a bird building a nest.

No Way Out shows Jim Boggia at the top of his form as a songwriter. Lyrically impressive, the song's melody is imaginative and unusual for the pop realm. This one is going on my personal playlist, and is one of the most finely crafted songs I've heard this year. So is the ultimate goodbye ballad. Misadventures In Stereo is just plain full of great songs, and Jim Boggia has a special spark that makes you want to listen again and again. Other highlights include Chalk One Up For Albert's Side, On Your Birthday and Three Weeks Shy.

If Misadventures In Stereo gets in front of the right people, you will see it on some end-of-year critics lists for 2008. Jim Boggia's voice is memorable, and his songs get in your brain like a virus. They just won't go away. Neither will Jim Boggia.

You can learn more about Jim Boggia at www.jimboggia.com. Misadventures In Stereo will be released August 5, 2008, and is available through Amazon.com.
Posted by Wildy at 11:15 PM