CD Review: Richards and Fitch - A Couple Of F Holes 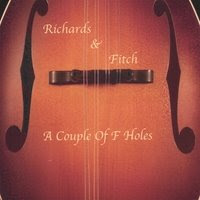 There were these two guys, see. One was named Bobby Richards and the other was Reno Fitch. No, I'm not kidding, Reno Fitch. Anyway, one day they decided to Reno & Fitch. It has made all the difference. Reno & Fitch hail from "Northern British Columbia" (Is there, technically, a Southern British Columbia?). Anyway, how two guys from Northern British Columbia manage to make some of the best Appalachian flavored folk music I've heard in ages I don't know, but that's exactly what Richards & Fitch have done. A Couple Of F Holes, aside from being moderately offensive to C- and G- clefs, is one of the finest folk albums of the last several years.

Bobby Richards is not a perfect vocalist, but his vocals are perfect for this music. Appalachian folk is more attuned to sitting around the kitchen table with family and friends and singing songs everyone knows. Throw A Couple Of F-Holes into your CD player and close your eyes. You'll smell overly strong coffee and the remains of dinner, you'll see the checked table cloth and feel the cool night breeze blowing in the back window.

My personal favorite here is The 809, about waiting for one's true love to come home. Now That I Have You is a wonderful little finger-picking tune, dancing on the line between American Folk, Celtic and country. To Make You Mine is a touching ballad. Stockboy To Satan is an absolute must-hear. Through all of these songs, silly or sublime, Richards & Fitch display flashes of a wicked sense of humor. Even in the most serious of songs there is just a twitch of a grin around the corners of their mouths, like they share some secret joke. Listen hard enough and long enough and maybe you'll get it, or maybe you won't. Either way, you'll be exploring folk music the way it was meant to be played. A Couple Of F Holes is a classic.

You can learn more about Richards and Fitch at www.myspace.com/richardsandfitch. A Couple Of F Holes is available at www.cdbaby.com/cd/richardsfitch.
Posted by Wildy at 6:23 AM