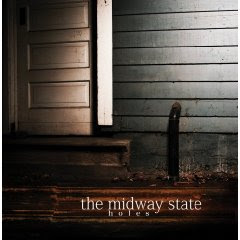 Toronto's The Midway State is something completely different in today's Modern Rock environment. The first thing you'll notice is the amazing vocals of Nathan Ferraro. He brings a smooth and urgent sound to the microphone that is reminiscent of some of the big mellow-rock bands of the 1980's (A-Ha, Air Supply, etc.). Once you get past the voice (it might take a few listens), you'll hear the huge emphasis on piano. This brings fullness of sound that many guitar-driven rock bands miss out on or make up for with distortion and effects. The effect is a laid back wall-of-sound effect that will wash you away. The harmonies are amazing and perfectly complement Ferraro's lead vocals. Wait, there's more. The songwriting is confessional, heart-on-the-sleeve type stuff. What comes across is an incredibly unrestrained, emotional, dynamic band that you want to like right away. Holes is an invitation and confirmation, inviting you in and asking you to stay awhile. You'll want to stick around and hear The Midway State's stories in song.

Never Again is one of the more straightforward rock songs on the album, with a driving chorus based in Ferraro's soaring falsetto and a wave of beautiful harmonies. Change For You is the first snapshot of the real charm of The Midway State. Ferraro strips down to his most personal in the choruses, but returns to the soaring harmony-filled choruses in this near-perfect tune.

Far and away my favorite tune on the album is Fireflies, with it's Rachmaninoff-like piano opening turning into a full-on onslaught of keyboard, guitar, bass and drums. This is the song that replays itself in my head at odd times. Again, the signature harmonies return in the chorus, but this may be the most complex of the tunes on Holes. Unaware has a bit of that confessional singer-songwriter feel to it, and will likely be a concert favorite.

The other song I want to mention to you is Can't Stop Waking Up To You. It perfectly captures the angst and sorrow the follows a lost relationship, and probably could make a run at the singles charts with the right push and exposure. Other highlights include the title track Holes, Hold My Head Up, I Know and No Crying.

The Midway State is a band that could make big strides in the pop world, but is also something of a musician's band. You could spend hours picking apart this recording and find happy little surprises, particularly if you're a music geek like me. Holes is a virtuoso performance, and producer Gavin Brown deserves major props for bringing out the best in The Midway State. Of course, you can't bring out what isn't there in the first place. I suspect that The Midway State is at the forefront of an amazing journey. Join them.

To learn more about The Midway State check out www.themidwaystate.com. Holes was released in Canada on July 22, 2008. You can currently purchase it across Canada, or outside Canada as an import for crazy prices (22.98 on Amazon.com). However on the bands website is a link to the EMI Canada store, where you can purchase the CD for something like half that price.
Posted by Wildy at 12:11 AM