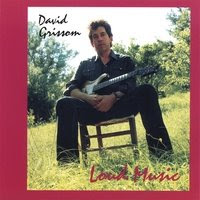 You've heard David Grissom, or at least his songs, many times without knowing who he is. Grissom has spent years as a session guitarist for some of the elites in the music business. He has worked with the likes of The Allman Brothers, The Dixie Chicks, John Mellencamp, Joe Ely, Chris Isaak, Robben Ford, Ringo Starr, Buddy Guy, John Mayall and Montgomery Gentry (just to name a few). His songs have been recorded by the likes of Tricia Yearwood, John Mayall, Storyville and Lee Ann Womack. After years of supporting other artists, David Grissom decided in 2007 to release his debut album of original material. Loud Music is the result, and you better be ready to rock and roll.

Grissom is known for making intense music, and Loud Music does not veer away from his trademark sound. The album opens with the motivated instrumental Lonesome Dave, and moves quickly into the country rocker Loud Music. This song could easily be a top ten country hit, and would have real potential to cross over on the rock charts. (Let's just say that if someone like Garth Brooks ever covered this song it would sell a few million copies). Wide Lode is gentle shredder of an instrumental, working off a killer guitar riff and syncopated bass line to make you want to get up and dance.

Other highlights include the harmonica-laden Hi-Tex, Nothing Makes A Man Go Crazy, Boots Likes To Boogie and Midnight Drive. David Grissom is something of a revelation here. It is not unusual for session players with tremendous musical skill to not be able to transition to the front of the band, for any one of hundred reasons. Grissom has no such difficulty, and sounds like he was meant to be out in front and behind the mic. Loud Music should wind up on some critics end of year lists, and with the country/rock hybrid has the potential to appeal to different constituencies of music fans.

You can learn more about David Grissom at www.davidgrissom.com. You can purchase a copy of Loud Music at www.cdbaby.com/cd/davidgrissom.
Posted by Wildy at 6:54 AM