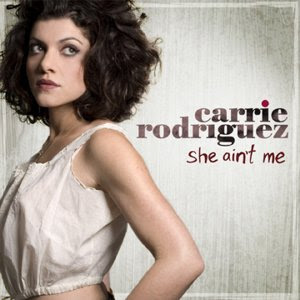 On August 5th Manhattan Records will release the sophomore album from Carrie Rodriguez entitled She Ain’t Me. This is a follow-up to 2006’s Seven Angels On A Bicycle, and marks musical growth and transformation for Ms. Rodriguez. The Austin, TX born, classically trained violinist learned along the way that the classical mold would not hold her. After being spotted by Chip Taylor (Angel Of The Morning, Wild Thing) in 2001, Rodriguez began her ascent. Learning on a European Tour that not only could she sing, but that audiences loved it when she did, Rodriguez has never looked back.

She Ain't Me is a peppy alt-country album with rock and soul influences. Infinite Night is an excellent start and leads into the title track. She Ain't Me has an autobiographical quality to it that could make it a long time concert staple. Carrie Rodriguez has a voice you can't help but get into. Her sultry alto has the right mix of vulnerability and toughness that would allow her to sing gibberish and still be interesting.

Absence is my favorite track on She Ain't Me, opening with celtic/bluegrass violin and a martial beat. Rodriguez changes things up into folk territory on El Salvador, and settles back into classic country balladeering on Mask Of Moses. The Big Mistake and Grace cover more standard country territory, while El Dorado returns to a Celtic-come-Middle Eastern sound over a rock bed. The album closes out with Can't Cry Enough, which is the perfect ballad to close out a country album with big ambitions.

She Ain't Me is an absolute treat. It's varied in sounds and styles, but rather than becoming confused or muddled, Carrie Rodriguez comes across as a many-faceted and ultimately talented artist. Her voice alone is worth the price of the disc, and I am quite confident that you will find something to love here. Carrie Rodriguez has arrived.

You can learn more about Carrie Rodriguez at www.carrierodriguez.com or at www.myspace.com/carrielrodriguez. She Ain’t Me will be released on August 5, 2008, and will be available on Amazon.com , and most major music retailers.
Posted by Wildy at 7:25 AM

Carrie Rodriguez is THE BOMB - can't wait to hear/get this album! Thanks for the heads' up!