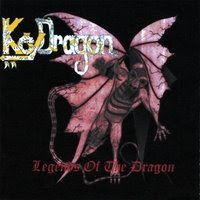 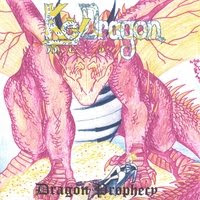 KeyDragon is a band consumed with dragon lore and mythology. They have issued a series of albums based on Dragons and their lore. Today we review two of those releases: Dragon Prophecy & Legends Of The Dragon.

KeyDragon's sound is definitely in the heavy metal realm, with the "dragon vocals" provided by Ron Langford in a sound that is more growl than singing. Other vocals are provided by Tamara Venus Star who has outstanding pipes. The music is fairly straightforward metal, with some leaning towards gothic or dark metal sounds.

I'll preface this by saying that the ever-presence of Dragons as song subject is a little much for this reviewer. At times it's as if so much concentration has been placed on telling stories about dragons that the music itself has suffered, but there are definite highlights. Dragon Propechy is highlighted by Maud And The Dragon and Fafnir's Tale. Fafnir's Tale is perhaps the most commercial song on Dragon Prophecy. The true gem here though is Facing The Dragon, which opens with a keyboard riff that devolves into a wonderfully variegated, guitar-driven ballad.

Let's be frank here, this is a niche band. KeyDragon isn't necessarily going to appeal to a wide swath of the listening public. Some people will be put off by the subject matter, and there are times when the music comes across as forced because the message is king here, not necessarily the music. BUT. If you are a progressive metal fan with some dark leanings, you will appreciate most of what KeyDragon is doing musically. And if you are a Dungeons and Dragons fan or a fan of dragons in general, this is probably right up your alley.

KeyDragon shows brief flashes of brilliance, particularly in the guitar work. It would be something to hear this band writing and playing a wider range of material, where writing choices were not so constricted by the singular subject matter they've chosen, but there are definite high points here worth checking out.