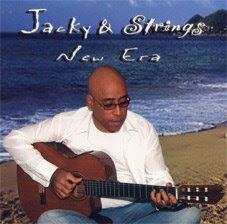 I was very much looking forward to this album when it came, and I was not disappointed by Jacky Ambroise on guitar. I wasn't as excited about the electronic/dance elements to the recording, which seem to detract from the virtuoso guitar contained within. Highlights include Rosa Maria, The Groove Is On Fire, Yanvalooh and A Brasileria. The latter is my favorite on the album.

Jacky And Strings are an incredibly talented group. The songs are danceable and intriguing, and Jacky Ambroise has a special flair with his guitar that is not often seen in popular music. New Era is a nice treat.

You can learn more about Jackie and Strings at www.jackieandstrings.com. The website will offer a link where you can purchase New Era.
Posted by Wildy at 12:24 AM