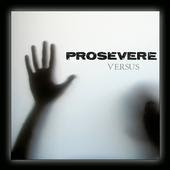 Prosevere is something of a super group that grew out of the Memphis, TN rock scene. Vocalist Gary Segars and guitarist Eric Ashe both are perfectly capable front men, and the rhythm section of Matt Riley (on bass) and Rocky Griggs (drums) is one that any band could wish for. Prosevere is a fearless band, taking musical risks and having just enough chutzpah to pull them off. 2008 sees the release of Prosevere’s debut album, Versus. It’s one not to miss!

Versus is your prototypical big rock album. Driving guitar and big rock choruses abound here; with a bit of punk energy that sometimes evades the corporate rock crowd. Vocalist Gary Segars is atypical for a band this heavy, as he has something of a lyric voice. This stands in contrast to the often heavy guitar style that pervades Versus. My favorite song here is Believing, which shows the acoustic side of Prosevere. Other highlights include Shots, Sleepless and Versus.

Prosevere combines the best elements of heavy metal and lyric rock and roll to forge a sound that is very commercial and very accessible. Don't be surprised if Prosevere has a significant future in the music business. As it is, Versus is a stunning premiere.

You can learn more about Prosevere at www.prosevere.com. Versus will be released tomorrow, July 29, 2008, and initially will only be available in the Memphis, TN area. Keep checking at their website, as Prosevere has a link for their own store, but it does not appear to be operable yet.
Posted by Wildy at 7:28 AM