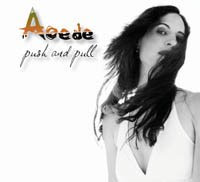 Aoede is a band with talented musicians in David Sands and John Walden, but it is really a vehicle for vocalist/songwriter Lisa Sniderman. Part Amie Mann and part Kate Bush, Sniderman exudes a painfully wrought honesty on Push And Pull. This is true singer-songwriter confessional material, without pretense or machination.

There is an urgency that runs throughout Push And Pull. Most of the time it's buried deep within the music, but it boils to the surface in songs such as in Nothing's Gonna Stop Me or Paper Tiger. This sort of angst-ridden desire displays Sniderman at her best. Annalis is a sadly beautiful epoch poem masquerading as a post-modern ballad, and is the centerpiece of Push And Pull. And if you're in for a little Belly-inspired anti-love song, check out Don't.

Aoede could have been transported from the early-90's, when a variety of female bands entered the alternative rock foray with post-punk influenced mellow rock songs. Aoede might easily have been the class of them all. Push and Pull is a remarkable vulnerable-yet-tough album full of great songs that stand on their own integrity. There's not a lot of fuss here -- no trend of great hooks or pop flavoring: just great songwriting, a unique and memorable voice, and tight musicianship. And what more, really, could you ask for?

You can learn more about Aoede at www.aoedemuse.com, where you can purchase a copy of Push and Pull. You can also purchase downloads of the album or any individual songs from either iTunes or Amazon.com