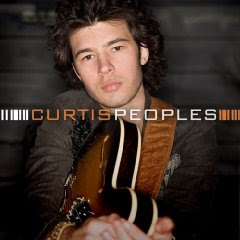 Curtis Peoples has a knack for getting under your skin. Whether on-stage, on MTV's SCORE, or in his roles on One Tree Hill or Walk The Line, he has an ability to connect with the audience on a personal level. Peoples also happens to have a knack for writing hook-filled pop/rock songs that stick in your mind long after the music has stopped playing. Aside from being a favorite of L.A.'s musical literati, Curtis Peoples was named on of Music Connection magazine's "100 Unsigned Artists To Watch in 2008". With all of the hype, I imagine you're chomping at the bit to get a listen to Curtis Peoples -- you don't have long to wait. His debut eponymous CD will be released August 19th, 2008. Get ready to hear a lot of Curtis Peoples throughout the rest of the year.

Peoples mixes a sense for catchy melodies, great pop hooks and 1980's flavored guitar-driven choruses to create one of the best pure pop/rock albums of the year to date. Curtis Peoples opens with Back Where I Started, an Americana flavored rock tune with a chorus you won't be able to get out of your head. Holding Me Down displays People's rock guitar sound and transitions to Tell Me I'm Wrong, which opens with a riff that Lenny Kravitz would be proud of. This is a great pop tune, and was co-written by Tyler Hilton.

Heart Will Fall is a great acoustic rock tune with a funk bass opening that resolves into an arena-rock chorus. For my money, however, All I Want is the true hit of the bunch. This is the sort of song that could corner popular radio for the summer. The sound is a little reminiscent of Five For Fighting, but is 100% Peoples. Exit Scene closes out the album with just a touch of country/pop flavor.

What is clear throughout Curtis People's self-titled debut is that the man knows how to write songs that connect with his listeners. His easy voice, accessible melodies and soaring choruses draw in the listener in a way many pop artists have failed to learn. Don't be at all surprised if this is one of the top debut albums of 2008. I expect you'll be hearing several of these songs in TV show soundtracks throughout the 2008-2009 television season. Peoples just has a sound that fits in anywhere. Check out Curtis Peoples before he gets as hugely popular as he has every right to be.

You can learn more about Curtis Peoples at www.curtispeoples.com. Curtis Peoples' self-titled debut will be released on August 19, 2008.
Posted by Wildy at 12:36 AM

Curtis was not in One Tree Hill or Walk the Line. That was his best friend, Tyler Hilton...