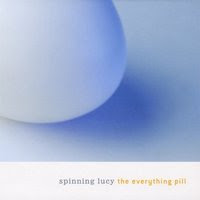 “Here’s another happy song about death”. – Will Roberts, Spinning Lucy

Isn’t funny how many of the best songs juxtapose peppy music with depressing or dark subject matter? Bands like the Cure and The Smiths made millions with this contretemps of lyric and song in the 1980’s and 1990’s, and many bands have followed in kind. It’s not to say that this is gimmick (although it is for some), it’s just the spoonful of sugar theory. We all love dark matter, but if it’s hidden in the sweet confection of pop it’s much easier to swallow. So it is with Spinning Lucy. 2008 sees the release of their debut album, The Everything Pill, a dynamic rock album with much to say, all couched in form of infectious, hook-heavy pop/rock you just might find yourself addicted to.

Will Roberts is the primary lyricist for Spinning Lucy, and I have already developed much respect for the man. I would compare him to another of my favorite lyricists, Ron Hawkins, as he has a definite way with words (If you forgive me the monsters in me / then I’ll forgive the ghosts in you). Roberts also possesses a gentle yet pervasive voice that is comfortable to listen to and compelling enough to be memorable. Set this against the backdrop of an incredibly talented band consisting of Doug Johns (drums), Brian Pylant (guitars/vocals) and Dave Lash (bass), and you find a synergy that many bands dream of.

Before we get to the music I want to say one more thing about albums in general. Any band worth its salt can come up with 2 or 3 songs for an album that are good. The better the band and the better the songwriting chemistry, the greater the likelihood of a band writing/recording an album that is deep with good or great songs. Human nature leads people to put their best stuff up front, whether best is viewed from quality or commerciality or whatever. That’s why very often you end up buying an album because of a single you heard, and you end up liking the first 2 or 3 songs (if you’re lucky) and not liking the rest of the album.

I say all of this because I find that the best albums seem to get better as they go along, and I find I tend to enjoy the second half even more than the first half. I am not entirely sure why this is the case, but it is, and so it is with The Everything Pill.

The Everything Pill opens with Starsign, which is probably my least favorite track on the disc, and yet it is a strongly commercial lead song and probably a good choice for a lead track/single. That’ll Be The Day, on the other hand, is what you came for. It’s the sort of upbeat rock song full of strong hooks and great melody that is perfect for the slightly dark subject matter it contains. The song reeks of the pure joy that Spinning Lucy must feel as a band at making great music.

I’ve seen a lot of the comparisons made for Spinning Lucy (Cheap Trick, Jimmy Eat World, Fountains Of Wayne), but for my money they sound quite a bit like one of my most favorite bands, The Lowest Of The Low. Roberts’ vocals are quite similar to LOTL co-vocalist Stephen Stanley, and some of the sound achieved on The Everything Pill matches up quite well to The Lowest Of The Low. (This is a huge compliment). Hello and Lions are strong examples of the sound I am talking about. Other highlights are Ghost In You, Goldilocks, Letting You Down and Flavor Of The Weak.

Spinning Lucy are talented, and musically they show a cohesion and spark that most bands would kill for. Add in the songwriting talents of Roberts and you get something of a juggernaut. The Everything Pill is all you could expect from such a group. It’s smart, driven, melodic and full of great songs, with just a touch of magic thrown in. Now line up. It’s time for your medicine.

You can learn more about Spinning Lucy at www.spinninglucy.com, or www.myspace.com/spinninglucy. You can purchase a copy of The Everything Pill at www.cdbaby.com/cd/spinninglucy.
Posted by Wildy at 2:21 PM