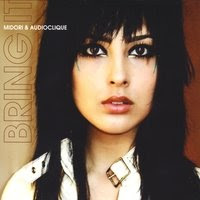 Midori and Audioclique hail from Santa Rosa, CA, and bring to us a new old sound.  Somewhere between the teen pop of the past decade and classic rock of the 70’s and 80’s is where you’ll find Midori and Audioclique.  Bring It is as much a declaration as an introduction.  The July 2008 release should be the first of many from this young band.

Bring It is not nearly as confrontational as its title would suggest.  This album plays like the soundtrack to One Tree Hill, Dawson's Creek, Everwood, and dozens of other prime-time teen dramas.  Vocalist Midori Longo has a strong and supple voice that resonates throughout Bring It.  Musically, Midori and Audioclique walk the line between 1990's alternative rock and 1980's pop-rock.  The result is a vibrant album full of big hooks, harmonies and lots of guitar.  Midori rails with the best on I Can't Rely and Bring It, and brings on the hyper-sensuality on Swim In My Ocean.  Other highlights include Close Your Eyes, Go, and Take Me There.  Take Me There is my favorite track on the album, and would likely have been a major hit in the 1980's.

Bring It is fairly even and sonically consistent throughout the album.  There are plenty of highs and lows in the flow of the music, but Midori and Audioclique never seem to lose sight of their musical vision.  This is one of those albums that is caught somewhere between good and great.  I will be curious to see what Midori and Audioclique do as a follow-up to this very strong debut.  Bring It is a snapshot from a band who could be around for a long time to come.  And it won’t be long before Midori Longo posters grace the walls of teen boys everywhere.

You can learn more about Midori and Audioclique at www.audioclique.net.  You can purchase a copy of Bring It at www.cdbaby.com/cd/midoriaudioclique.
Posted by Wildy at 6:51 AM