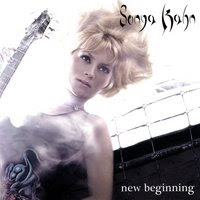 Sonya Kahn has been performing in front of major audiences for 20 years now.  The classically trained pianist was a member of popular European group Sunshine for a number of years, and also did time as member of Take 5 here in the US.  In 2007 Sonya Kahn staked her claim as a solo artist, releasing New Beginning.  This wonderfully complex and challenging rock album is a giant musical step forward.

New Beginning is the sort of album that could establish Kahn as a Rock Diva, ala Celine Dion with a bit harder of an edge.  Don't Go Away is the type of song that marketers build campaigns around, and just might be the class of this classy album.  Friend is a bittersweet and angry ode friendship lost, and allows Kahn to display the power and vulnerability her voice can convey.  Hunter opens up the pipes for a blues inflected rock tune that wants to border on heavy metal.  Don't Go Away is a plaintive plea and perhaps the most gorgeous melody on the album.

In short, New Beginning shows the incredibly dynamic range of sound that Sonya Kahn can create with her voice.  Here we see a potential superstar in the making.  New Beginning rocks, coos, soothes, and shakes you for all its worth.  You'll keep coming back for more.

You can learn more about Sonya Kahn at www.sonyakahn.com.  You can purchase a copy of New Beginning at www.cdbaby.com/sonyakahn, or through Amazon.com.
Posted by Wildy at 7:11 AM